PREA: Why it Matters in the States 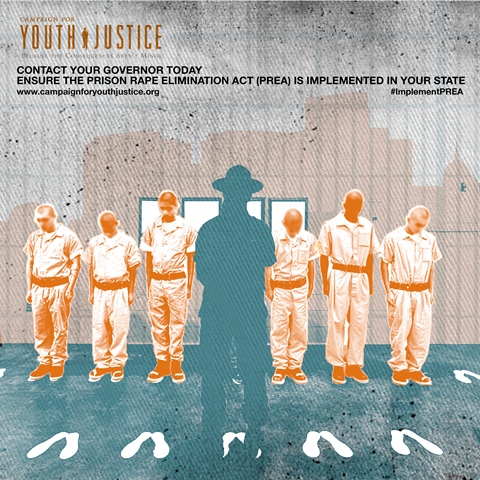 On any given day, over 8,000 youth are detained or confined in adult jails and prisons.  The research shows that youth are not safe in adult jails and prisons and are at the greatest risk of sexual victimization.  According to research by the Bureau of Justice Statistics, youth under the age of 18 represented 21 percent of all substantiated victims of inmate-on-inmate sexual violence in jails in 2005, and 13 percent in 2006 - surprisingly high since only one percent of jail inmates are youth.  The National Prison Rape Elimination Commission found that, "more than any other group of incarcerated persons, youth incarcerated with adults are probably at the highest risk for sexual abuse."  Research also shows that youth are 36 times more likely to commit suicide in an adult jail than in a juvenile detention facility.   Over ten years ago, the Prison Rape Elimination Act (PREA) unanimously passed Congress.  The U.S. Department of Justice (DOJ) issued final regulations in August 2012 to implement PREA in order to end sexual violence behind bars. YOUR VOICE was instrumental in getting these regulations published and the Youthful Inmate Standard is a powerful tool in removing youth from adult jails and prisons. This week, CFYJ will highlight states that are working towards justice reform utilizing the tools that PREA provides. We will continue to be watching as Governors provide certifications to the Department of Justice in hopes that states move closer to full PREA compliance.

By May 15th, Governors will have to certify whether their state is in compliance with PREA, or make assurances that federal dollars will be used to come into compliance. Help us monitor state responses and continue to advocate for full PREA implementation:There's No Excuse! Protect Children from Rape in Adult Jails and Prisons. Use #ImplementPREA to show your support.Please visit our blog this week for updates on PREA from around the country.Additionally, here are some sample posts for social media, please share:Twitter:“There’s No Excuse” national week of action to end prison rape #ImplementPREAPrison Rape Elimination Act was passed to end sexual abuse behind bars. Act now to #ImplementPREA