Youth Justice Leaders Must Speak Out on the Border Crisis

Posted in Across the Country Thursday, 22 August 2019 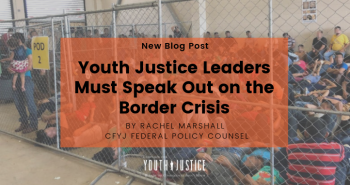 As an organization that works to end the prosecution, sentencing, and incarceration of youth in the adult criminal justice system, every day my colleagues and I work to educate the public and policymakers on the horrors of subjecting our nation’s young people to the adult criminal justice system. Research shows that the placement of youth in adult facilities are at a higher risk of physical, sexual, and emotional abuse. But even if youth remain in the juvenile justice system and are incarcerated in juvenile facilities, they are still at risk for abuse and irreversible trauma. Thanks to excellent investigative reporting, we know that incarcerated youth are too often subjected to horrific abuse at the hands of facility staff.

Fortunately, our policymakers finally seem to realize how detrimental incarceration is to our nation’s young people. The most recent data from the Office of Juvenile Justice and Delinquency Prevention (OJJDP) shows that there has been a 60 percent drop in youth in juvenile facilities since 2000. There has also been a 63 percent drop in the arrest rate of youth. The number of youth in adult jails and lock-ups also continues to decline. The public is also on board with finding alternatives to incarceration. A recent poll from our partners at Youth First found that 57 percent of American favor closing youth prisons.

As we finally start to make a dent in protecting youth from the juvenile justice and criminal justice systems (and, trust me, we still have a long way to go), another set of youth are being subjected to unthinkable horrors. News reports are flooded with stories and images depicting the sub-human conditions to which immigrants at the border, including children, are being subjected. Children and babies are sleeping on concrete floors, forced to stay in filthy clothes, and deprived of access to showers, soap, or toothbrushes. There has been an outbreak of disease in these detention centers due to the lack of access to proper hygienic care or appropriate medical interventions, leading to preventable deaths. Young children are taking care of infants. They also lack adequate food, and there have been recent reports of immigrant youth being sexually assaulted by border patrol agents.

The government has labeled these children as “unaccompanied minors,” but many are actually in detention as a result of the Trump administration’s family separation policy, or have family already in the U.S. who could care for them. The separation from family also inflicts trauma on these children. For the past 15 years, research has shown that when children are separated from their families there are lifelong negative consequences. The stress children experience when separated from their families can lead to an increased risk of numerous diseases, depression, substance abuse, and early mortality. Of course, this research does not even take into consideration the additional trauma of incarceration on these children.

Just this week, the administration announced plans to introduce a new rule to make radical changes to the Flores Settlement Agreement, which outlines the policy for holding immigrant youth in detention. Currently, the government may only detain immigrant youth for 20 days. Under the proposed change, the government could detain immigrant families together indefinitely. The children and families who are fleeing violence in their countries of origin are not engaging in criminal behavior. They are not public safety threats. They are requesting asylum and protection in our country. To incarcerate them, even as family units, is inhumane and unacceptable, and will still cause irreparable harm to these children.

As youth justice advocates, we know all too well this country’s proclivity to traumatize children through the incarceration of both children and parents. For this reason, it is imperative for us to speak out. Make no mistake, the incarceration of immigrant children and adults represents a rollback to any progress we’ve made in criminal and juvenile justice reform. As Maya Schenwar and Kelly Hayes so aptly pointed out in Truthout, “The migrant camps in which children are being incarcerated are concentration camps — and they are also prisons. We must hold these dual, overlapping realities in our minds, as we strive to comprehend the interrelated horrors to which the United States — not just Trump, but the United States — subjects millions of people every day.”

As we continue the fight for a more just system, I urge my fellow colleagues in the youth justice space to fight for ALL youth, including the immigrant children suffering at our border.