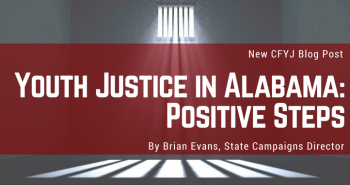 From 2010-2015, an average of 600 children were tried as adults in Alabama each year; most of them were sent to adult court automatically, without any judicial review.  It is well known that the adult system is worse, both for the young people sent there, and because of higher recidivism rates, for the society that sent them there.  In an election year where reactionary, ‘80s-style, “tough on crime” rhetoric is making an unwelcome comeback, it is refreshing to see that Alabama apparently intends to move – albeit slowly – in the “smart on crime” direction.

The recommendations of a wide-ranging Juvenile Justice Task Force (pdf), endorsed today by Alabama Governor Kay Ivey, include a proposal to reduce the number of crimes for which a child must automatically by charged as an adult. The Task Force has also suggested removing the current requirement that once a child has been convicted as an adult, he or she must always be treated as an adult for any future infractions, no matter how minor.

While the best thing to do would be to not charge children as adults at all, or at least not without judicial oversight, these proposals are positive steps.

As the 2018 legislative session gets underway, there is, of course, no reason Alabama legislators can’t go further.

The rationale for keeping children out of the adult system – that it’s bad for them and bad for society – does not change with the seriousness of the alleged offense. A child who is charged with Robbery 1 (robbery with a deadly weapon, the most common offense for which youth are automatically treated as adults) is just as likely to benefit from staying in the juvenile system, and just as likely to suffer in the adult system, as a child who is charged with a lesser offense.

If the purpose is to protect young people and their futures, and reduce future recidivism, Alabama should completely end the practice of automatically charging children as adults in Alabama.