Adultification of Children, Racism and Police 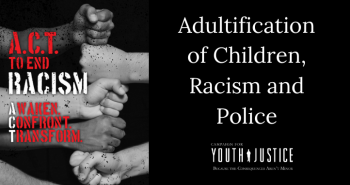 This week, communities across the country are taking action against the brutal deaths of black men and women by law enforcement.  The loss of life of George Floyd (MN), Breonna Taylor (KY), David McAtee (KY), and  Ahmaud Arbery (GA) by the hands of those meant to “serve and protect” has led to protests and calls for change that are among the biggest this country has ever seen; with action in more than 200 cities in every U.S. state, the District of Columbia, and across the globe.

The Campaign for Youth Justice stands in solidarity with the calls to end these brutal killings, dismantle the structures that uphold racism, and redefine our country’s values based on justice, fairness, and love.

We grieve with the families who have lost loved ones, and we understand that black lives include the lives of children. Just this May, Cornelius Frederick (16), was killed by a staff person at Lakeside Academy in Kalamazoo, MI, where improper use of restraints led to Cornelius’ death. Harassment, injury, and loss of life is an all too common experience for many black children who come in contact with the law.

Less visible, but no less harmful, is the adultification of youth (particularly black and brown youth) by law enforcement, the legal system, and other systems of oppression. Viewing and treating children as if they were adults denies them the protections of childhood, and excuses or even sanctions excessively harsh treatment and punishment toward them.  As CFYJ has noted for over 15 years, the adultification of youth falls disproportionately and extremely on black youth and other youth of color as well.

CFYJ has provided guidance to judges, prosecutors, and legislators on how best to protect children from the harms of the adult criminal legal system. And while judicial, legislative, and even prosecutorial reforms have been moving in the right direction, law enforcement remains mired in hostile and racist attitudes.

Adultification begins with contact with law enforcement, often in schools.

This is also where racial disparities begin, as contact with police is based on where police are and their attitudes towards black children – current police culture nationally, and in most jurisdictions, is inherently, and often openly, racist and violent.

For the sake of black children, as well as for the adults who are their families, police reform is urgently needed. Police culture in most jurisdictions is toxic to the communities in which they serve. It does not advance safety but instead imposes lasting harm and trauma on children and adults, particularly in black communities. Reform must begin with accountability. Absent any significant reforms that involve real accountability, our children will continue to be over criminalized and dehumanized. We call on all of us to do our part and ensure:

To advance the above reforms, it is imperative that we work cross sector, cross race, and across jurisdictions to hold law enforcement accountable and protect our children and communities.  We encourage our partners to support the actions of the Movement for Black Lives this week, and in the weeks to follow.  This will require a divestment in policing tactics and a major investment in communities from all of us.