Campaigning for Youth Justice: Fifteen Years in the States 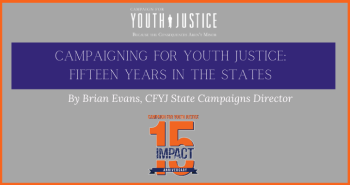 The Campaign for Youth Justice will be closing in December. We could not be more proud of the success we have had along the way, especially in our campaign states. Check out the first in our series of blogs by CFYJ's State Campaigns Director, Brian Evans on our 15 years of progress and why it's important to get ready to #VoteYouthJustice on National Voter Registration Day.

Reducing, limiting, and ultimately ending the prosecution of children as adults has required a lot of work to achieve legislative changes in the states. During the past 15 years, as we at the Campaign for Youth Justice have pursued this work, 40 states and Washington, DC, have changed their laws to reduce the number and mitigate the harm of charging children as adults. More than half of the states have enacted multiple reforms, and, as a result, the number of children prosecuted as adults each year has dropped from around a quarter of a million to, in 2015, about 76,000. This number is likely significantly lower now, as since 2015 four states (LA, NC, NY, SC) have implemented raise the age laws that ended the automatic prosecution of all 16 and/or 17-year-old youth as adults. Two more states, Michigan and Missouri, are set to implement “Raise the Age” laws next year.

During the early years of our work at the Campaign for Youth Justice, state legislative reforms were rare, but as some legislation passed and proved effective, the pace of legislation restricting the prosecution of children as adults accelerated, and the debate shifted from whether more children should be returned to the juvenile justice system, to how to make it work and how to pay for it.

This narrative shift is largely the result of the efforts of directly impacted families and state-based advocates, pushing their state governments not only to change laws but to think differently about children accused of violating the law.

In addition to passing “Raise the Age” laws, states have reduced the use of automatic transfer, expanded the opportunities for children to reverse their transfers and return to juvenile court, and protected children from being subjected to incarceration in adult jails and prisons. Almost half the states (22) have passed laws that limit, or fully repeal, automatic transfer mechanisms; and 24 states have passed laws to keep children from being locked up in adult facilities.

Even this year – a year of truncated legislative sessions – states managed to pass important reforms, as Virginia raised the age of eligibility to be directly charged as an adult by a prosecutor to 16, Utah restricted its automatic transfer law, and Washington prohibited the detention of children charged as adults in adult jails.

So far, these kinds of youth justice reforms have, for the most part, remained non-partisan or bi-partisan. As the Campaign for Youth Justice winds down its work, it is important for us to emphasize that this may or may not continue going forward. As major reductions in the prosecution of children as adults have been achieved, a larger share of those who remain in the adult system are those accused of violent offenses – and racial disparities remain glaring. Reforms that directly address violence and systemic racism are likely to be more controversial and more difficult to achieve.

Maintaining the narrative shift – that children who violate the law deserve support, not condemnation – will be critical. Expanding it to include ALL children will be essential.

In recent years, there has been a strong resurgence of open racism, and an attitude of fear and hostility towards children of color and children accused of violence, often embraced or instigated by political leadership. This dangerous current must be countered. The upcoming election, where voters will select prosecutors, judges, state legislators, members of Congress and the President, will be a crucial moment that may determine whether youth justice reforms can continue to succeed. To carry the work forward, we all must Register to Vote and #VoteYouthJustice.