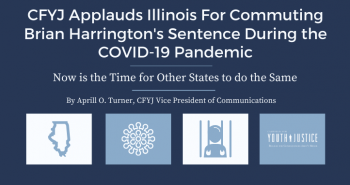 Recently, Illinois Gov. J.B Pritzker granted clemency to more than 1,000 incarcerated individuals including Brian Harrington, who at age fourteen was prosecuted as an adult and sentenced to twenty-five years under the state’s truth in sentencing law.  He served 13 years of his sentence before being granted executive clemency, getting to go home just shy of spending over half of his life incarcerated.

CFYJ first met Brian last year as he was preparing to present his case to the clemency board. To hear directly from Brian about his case and his experience in the adult system, listen to CFYJ’s podcast with him, here.

Unfortunately, Brian's story is one of many in Illinois and in other states of our youth spending decades in prison for offenses committed while under the age of eighteen. Advocates have been leading the charge and calling on governors, the federal government, local legislators, and juvenile justice department leaders to remove adults, as well as youth from secure custody and reunite them with family members during the COVID-19 pandemic.

Gov. Pritzker joins other governors and local officials across the nation that are working to take meaningful steps to slow the spread of COVID-19 in jails and prisons across the nation. We have also seen Maryland, Colorado, California, New York, and hosts of other states make moves in this direction as well. Yet more can be done.

Research demonstrates that incarcerated populations are most at risk during a public health crisis.  Youth detention centers and adult jails and prisons commonly cage children in unsanitary and close quarters conditions when we aren't in the midst of  a global health pandemic. While imprisoned, it is impossible for young people to practice any type of social distancing, or to frequently wash their hands; hand sanitizer is not available because of the high alcohol-content. As COVID-19 continues to spread quickly in enclosed spaces, it is spreading just as quickly in detention centers, prisons and jails, none of which are equipped to handle the medical needs of youth if a COVID-19 outbreak should occur inside a detention or correctional facility.

According to Ballotpedia, 31 states have enacted some sort of measure to release incarcerated people at this time. The states that have taken no measures at all, are extraordinarily troubling. States should be moving quickly to pull any minor child out of adult facilities and bring allow them to shelter at home, unless they pose a substantial public safety risk.  Here are where states currently stand in response to COVID-19 and the release of incarcerated individuals n adult facilities (as of April 30, 2020):

Additionally, in order to relieve crowding in juvenile facilities, in order to limit the spread of COVID-19, The Sentencing Project is tracking COVID-19 positive diagnoses among youth and staff at juvenile facilities and the number of known cases in each state. Check out their research here.  Also, the Annie E Casey Foundation has reported a 24% drop in youth detention since the pandemic started.  This is an important first step, and farther than any adult facility has moved, which is why all children belong at home when possible, and in a developmentally appropriate placement on the rare occasion that it isn’t possible.

We are truly living in unprecedented times, but still need to be the voice and advocate for our most vulnerable populations. If interested in taking action to protect our youth at this time, our friends at Youth First, have put together great tools to amplify the message that we need swift action to remove our children from secure custody.  Please join the #FreeOurYouth campaign today.