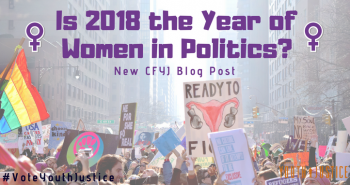 “We're half the people; we should be half the Congress.” - Jeannette Rankin of Montana, first woman to hold federal office in the United States

That was the vision of the first woman elected to Congress in 1916, four years before the 19th amendment secured (white) women’s right to vote and another 45 years before African American men and women were able to exercise their right to vote.

We are not there yet, but 2018 promises to be a seminal year for women in politics.  Today, there are 84 women in the House of Representatives and 23 in the Senate – roughly 20% of the Congress.  Of the 107 women serving in Congress, 38, or 35.5%, are women of color.  An improvement over time, but still far from half the Congress.

But this year in particular more women are stepping up to run for office at all levels of government.  According to the Center for American Women in Politics, more than 430 women are running for Congress this year – double the number of women who ran in in 2016.  And, of those women running for the U.S House or Senate, nearly a quarter are Black.

Why does this matter?   Because women elected officials are effective.  They get it done. Research shows that women introduce and pass more legislation than their male counterparts, send more federal dollars home to their districts and are more likely to reach across the aisle to seek common ground.

Not only do women in office get more done, they also tend to prioritize issues connected to women and families.  And this provides youth justice advocates with the opportunity to make sure those seeking political power understand the issues facing youth and families involved in the juvenile justice system and lift them up in their candidacy and in their agenda if elected.

It’s not just those running for federal office who matter, either.  Governors, state legislators, county commissioners, district attorneys, and mayors all make decisions about their communities and how our tax dollars are spent.  And there are more women and people of color than ever running for these seats across the country as well and they are already winning.

So now the question is, how to get involved to make sure youth justice is part of the conversation in this election year?  Start by checking out the Your Vote is Your Voice: A Toolkit for Youth Justice and Electoral Advocacy, which provides the basics about how to engage in the political process; how to educate those seeking office about the issues facing youth involved in the juvenile justice system; and how to help those who care about youth justice issues register to vote and vote.

Remember that no one knows more than you do about the issues important to you and your community. Elections provide a unique opportunity to demonstrate your expertise on youth justice issues and establish yourself as a trusted source of information.

Educating candidates – both the women and men running for office – about youth justice issues is also just one part of effective electoral advocacy. Building a voting block of constituents who share your commitment to a fairer, more effective justice system that helps young people and families and improves community safety helps build political power for youth justice issues.

There are a number of organizations working to register voters and make sure once registered, voters turn out on Election Day.  The Electoral Justice Project, Black Youth Vote!, Rock the Vote, NALEO Educational Fund, Asian and Pacific Islander American Vote, League of Women Voters of the US and Nonprofit VOTE are just a few.

Getting involved in elections has the added benefit of making you and your community stronger.  According to census surveys, people who register and vote are more connected to their communities and are more likely to be active in their communities.  Voter and civic engagement has also been linked to reduced unemployment, lower recidivism rates, and better individual and community health.

Elections give us all the opportunity to influence the direction of our cities, counties, states and country.  The rise in the number of women, people of color and other traditionally underrepresented constituencies running for office this year suggests we may be getting closer to a time when those in office look more like the population they are serving.  Let’s make sure youth justice issues are part of the conversation.