It’s Complicated: The U.S. and the International Human Rights of Children 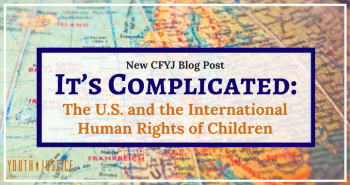 Almost 1,000 participants gathered in Paris, France at the end of May for the World Congress on Justice for Children, a global conference of youth justice professionals and advocates. The conference, organized by several European and international groups, was built thematically around the issue of children involved in “violent extremism” (no doubt a significant concern), but the workshops and conversations in the hallways and courtyards of the UNESCO House were much broader in scope.

As one of many representatives from the United States – the only country in the world that has not ratified the U.N. Convention on the Rights of the Child (CRC) – it was both refreshing and depressing to realize that elsewhere there is an almost universal consensus that compliance with this human rights treaty is of central importance to achieving an ideal youth justice system.

Article 37 of the CRC bans life capital punishment and life without parole for children, and requires State Parties to end the practice of incarcerating children with adults. Article 2 requires State Parties protect all children’s rights without discrimination, and Article 3 emphasizes that states must always ensure that the best interests of the child are paramount. Article 41 requires the “establishment of a minimum age below which children shall be presumed not to have the capacity to infringe the penal law.”

We noted in our conference workshop that indeed the U.S. was making some strides in these areas, with the glaring exception of Article 2, as racial and ethnic disparities are not improving and in some cases are getting worse, even as reforms reduce the overall numbers of children charged as adults. (The emerging, horrific, U.S. government policy of separating children from their families at the border was also the topic of some discussion at the Congress, and has since been called out by the U.N. Human Rights Office.)

Given current political realities, U.S. ratification of the CRC, which requires a two-thirds Senate majority, does not seem likely, but that should not prevent advocates from working to move the U.S. towards compliance with the treaty – which is more important in terms of establishing actual human rights protections, anyway.

Along with our North American colleagues from Canada and Mexico, we brainstormed ways forward for the U.S.  In 2009, the city of Chicago adopted the CRC, resolving to “advance policies and practices that are in harmony with the principles of the Convention on the Rights of the Child in all city agencies and organizations that address issues directly affecting the City's children.”

This is something that could be duplicated in local jurisdictions, and maybe even some states, across the country. While the U.S. government is busy isolating itself and pushing in the wrong direction, perhaps the American people, acting locally, can push back.

After three days of comradery with fellow advocates and youth justice stakeholders from around the world, I felt a sense of real solidarity, and of sympathy for our status as children’s rights advocates trying to work with an outlier government. It was invigorating to feel such support.

Back home, for practical political purposes, we usually don’t frame what we do as human rights work, but when we reform practices that send children into the adult system, we are not just improving justice – we are defending children’s human rights and inching our country closer to globally recognized international standards.