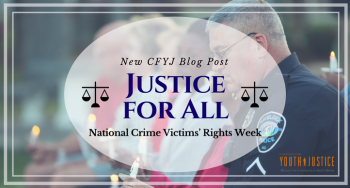 From the federal level to state legislatures across the country, criminal justice reform measures are a hot topic of conversation and proposed legislation. What is often lost in those conversations are the views and voices of victims. As an organization that fights to end the prosecution, sentencing, and incarceration of children in the adult system, we are all too aware that children are often times victims of crime and exposed to trauma before they ever get arrested. One young man who was 15 when he began an 8-year sentence in an adult prison for a carjacking said, “It never occurred to me to carry a gun, or use it against someone until someone stuck a gun in my face.” We know that children who come in contact with the justice system have higher rates of exposure to trauma and violence than children who aren’t in contact with the system. We also know that some victims experience trauma not only after a crime has been committed, but also after their experience with the justice system. Further, we know that in many cases, crimes of violence are perpetrated against family members or members of our community--so limiting our response to victims to a carceral one only often does more harm than good. It’s time to take a new, holistic approach to restoring justice and healing in our communities, one that yields outcomes that reduce future offending, not just punishment.

Every April, the Office for Victims of Crime (OVC) within the Department of Justice commemorates National Crime Victims’ Rights Week. From April 8 through the 14 of this year, OVC will be looking at the theme of inclusion in victims’ services and examining how the crime victims field can ensure all crime victims have access to services and supports. In 2016, OVC made a significant change to their guidelines, allowing victims to get access to supports even if they chose not to be involved in the criminal justice process. The guidelines also expanded their definition of who qualifies as a victim--including children exposed to violence, immigrants regardless of their status, and victims who are in secure custody. They also encouraged targeting resources to underserved communities that have high victimization. These are critical changes, and need to be supported--there are opportunities for individuals and communities to leverage these resources to support programs that focus on healing, restorative practice, mental health and substance abuse interventions, and other services that address underlying trauma to stop cycles of victimization.

Two years ago, the Alliance for Safety and Justice commissioned the first ever National Survey of Victims’ Views. The survey results, released in July 2016, revealed that, “[b]y a 2 to 1 margin, victims prefer that the criminal justice system focus more on rehabilitating people who commit crimes than punishing them.” When asked about youth specifically, victims of crime prefer investments in crime prevention rather than investments in jails and prisons by a 7 to 1 margin. Across all demographics – gender, race, geography, and political affiliation – both victims of violent crime and victims of property crime agreed that we should be investing in community supervision and looking at options beyond prison.

One option that is slowly being implemented by states and localities across the country is a restorative justice model. Rather than just punish the perpetrator, restorative justice aims to repair the harm caused by the crime and emphasizes accountability by offenders and healing for the victims. While restorative justice programs take time and investment, studies have shown these programs can also reduce recidivism because these practices often address the root cause of the behavior. What it more, victims are often more satisfied with the results of restorative justice.

Take Colorado, where judges in certain jurisdictions have discretion to evaluate offenders to determine whether they would be a good candidate for restorative justice. Through a series of meetings, the offender and the crime victim are prepared for a “circle” meeting. During the circle, both parties talk about the crime, including what motivated it and how they were affected. The parties, with the help of a facilitator, then decide how the offender can repair the harm. Washington State also just passed a juvenile justice bill aimed at diverting more youth from the juvenile justice system. Restorative justice programs have been available to youth offenders in Washington since 2012, but the new bill will allow youth to choose these community-based programs without creating a criminal record.

Unfortunately, restorative justice practices are rarely used for youth who commit violent crimes, despite the fact that such practices are supported by the victims. In Baltimore, Councilwoman Rochelle “Rikki” Spector was assaulted and car jacked by two teens. Instead of urging these boys to be incarcerated, Councilwoman Spector has worked with others in the community to help these boys improve their grades and become leaders in their communities. Both teens now have a strong relationship with the Councilwoman, and all of this was accomplished with the help of UEmpower of Maryland, a nonprofit that helps to provide services such as job training skills and mentoring to the youth of Baltimore.

Restorative justice also takes into consideration the fact that youth offenders are often victims themselves. In the Baltimore neighborhood of the two teens who assaulted Councilwoman Spector, nearly half of the families live below the poverty line and youth are nearly twice as likely to be murdered than elsewhere in the city. One of the teens involved in the incident lived in a home where the electricity had been shut off, and he rarely attended school. This story is not uncommon for youth who get caught up in the justice system. In fact, studies have shown that nearly all children in the justice system have experience at least one trauma, and over half have reported being exposed to trauma six or more times in their young lives.

Girls who have survived trauma are particularly vulnerable. A recent report from the national Crittenton Foundation and the National Women’s Law Center noted that the number of girls in detention has spiked over the years and, of the girls in the juvenile justice system, 84% have experience family violence. This type of trauma often leads girls to run away from home, start fights, and abuse substances, which is a direct line into the justice system. Incarcerating these young victims then tends to exacerbate the problems rather than addressing the root causes and increases the chance of recidivism.

As we take this week to focus on victims of crime, we should ensure that we are not only listening to and amplifying the voices of victims, but that we are also addressing the ways that our current justice system further victimizes communities by not committing to restorative justice principles. By taking this into account and taking the lead of crime victims and investing in alternatives to incarceration, we can create stronger, safer communities.