On This National Day of Prayer: A Prayer for Incarcerated Youth During the COVID-19 Health Pandemic 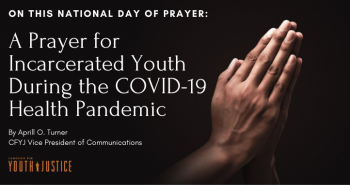 "Continue to remember those in prison as if you were together with them in prison, and those who are mistreated as if you yourselves were suffering."--Hebrews 13:3

As a person of faith, I cannot let the day go by without saying a special prayer for our children across the country incarcerated as adults, especially given how they are being treated during this global health pandemic.

This is further escalated during a global health pandemic. Experts say prisons and jails can act as petri dishes for the coronavirus. Youth behind bars are often unable to practice safety measures such as social distancing, frequent hand-washing, and staying in sanitary areas.

Additionally, cutting family visits and placing youth in medical isolation have been some of the recent measures that facilities have enacted as a response to COVID-19.

We have also seen that educational programs have been cut or suspended, and visitation from family has been totally cut off in most cases, leaving children feeling isolated and vulnerable. Kids who are locked up already have a far higher risk of suicide than those in the general population. Institutions are also using solitary confinement in order to mitigate the spread of the virus, which also increases the likelihood of suicide amongst this population.

This all is taking place, while going against what we by and large believe as a society.  Polling commissioned by Prison Fellowship finds Christians—are more likely than most Americans to want “safe and humane” detention conditions.  Their research revealed the vast majority (82%) of Americans agree that prison conditions should be safe and humane (33% strongly agree). Americans generally recognize the intrinsic value of each person. This number is higher among practicing Christians (43% strongly agree) and even higher among evangelicals (52% strongly agree).

Our nation is better than this. We know that when we make smart investments—in education, mental health, and family supports—our children do better. On this National Day of Prayer, I hope we can reflect on who we are as a nation and how we treat incarcerated children during this pandemic, because we are better than the policies we are seeing implemented.

We ask you to join us in continuing to call on policymakers to exercise their full authority to remove youth from correctional facilities. Visit here to sign a petition calling on our nation's governors to protect youth in custody from COVID-19.