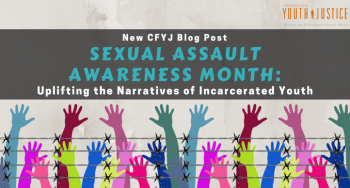 As someone who works on juvenile justice reform, it comes as no surprise that the sexual assault of incarcerated youth, particularly youth in adult jails and prisons, runs rampant. A quick scan of news stories yields alarming results. Recently, sexual abuse scandals in juvenile facilities in Texas and Wisconsin have been making both national and local headlines. And who can forget the eye-opening report from the Huffington Post in 2016, Cruel and All Too Unusual, that revealed the horrific abuse faced by youth in adult facilities in Michigan. Then there are the stories dating back five to ten years ago, like the ProPublica story headline that reads, “Sexual abuse on the rise at U.S. juvenile detention facilities” from 2013 (3 years later they published another piece titled “Why Are Rates of Sexual Abuse in Juvenile Detention Facilities on the Rise?”).

Yet, at a time where people (women, mostly) are speaking out about sexual assault and the #MeToo movement (started in 2006 by activist Tarana Burke) is sweeping the nation, there are still so many being left behind—namely incarcerated children. Because they are held securely behind the walls of prisons, these assaults against children are largely invisible.

Incarcerated youth do not have the same platform as those outside the justice system, but, thanks to the Bureau of Justice Statistics (BJS), we can get an idea of just how pervasive sexual assault is for incarcerated youth. In January 2016, the BJS issued a report on the sexual victimization reported by juvenile correctional authorities. The findings reveal that the number of sexual assault allegations have continued to rise over the years, from 19 per 1,000 youth in 2005 in state juvenile systems, to 47 per 1,000 youth in 2012. Of the reports from 2007 to 2012, 45 percent of those allegations involved staff-on-youth sexual victimization.

Youth incarcerated in adult facilities are even more vulnerable, which prompted Congress to pass the Prison Rape Elimination Act of 2003 (PREA). In the bill’s findings, Congress noted that “juveniles are 5 times more likely to be sexually assaulted in adult rather than juvenile facilities- often within the first 48 hours of incarceration,” and therefore they need special protections. In 2012, the PREA regulations were finalized and created national standards for lock ups, jails, detention centers, and prisons across the country.  Section 115.14, the Youthful Inmate Standard applies to all individuals under 18. The standard requires that youth must be separated from the adult inmate population. Correction officers must prevent youthful inmates from having sight, sound, or physical contact with adult inmates while in housing units. While outside of housing units, the sight and sound separation must continue or the correctional facility must provide direct staff supervision of its youthful inmates. The Youthful Inmate Standard was strengthened by Congress in 2016 with the passage of the Justice for All Reauthorization Act of 2016 (JFA). Under the JFA, states have six years to comply with the Youthful Inmate Standard, or they risk losing a percentage of their funding.

While the passage of PREA and JFA were a step in the right direction, it has not eradicated widespread sexual assault of incarcerated youth. In fact, in January it was reported that a 17-year-old young man who is incarcerated in adult facility in Baton Rouge, Louisiana was raped and infected with HIV. Sadly, this young man is not alone; three others in Louisiana have also come forward.  According to BJS, youth under the age of 18 represented 21% of all substantiated victims of inmate-on-inmate sexual violence in jails in 2005, and 13% in 2006 – two surprisingly high rates given that only 1% of jail inmates are juveniles.

Fortunately, the #MeToo movement is becoming more inclusive in acknowledging the many victims of sexual assault. One place that has become evident is in the recent recognition that many girls and women in the juvenile and criminal justice system have been victims of sexual assault. For example, at the end of March, the Spirit Awakening Foundation hosted a performance at a juvenile correction facility in Los Angeles County to provide young women with the opportunity to share their stories of trauma and abuse. And more and more news outlets are covering the issue of prison rape through the #MeToo lens. Still, youth in adult facilities have yet to receive a platform in this movement.

So, how do we change this? First, we need to ensure that laws that are in place to protect incarcerated youth from sexual assault are fully implemented and enforced. According to the Department of Justice, only 19 states have fully adopted the standards required by PREA. Another 34 states and U.S. territories provided assurances that they are working toward compliance. Utah and Arkansas have thus far refused to comply. Many states and localities have considered or passed legislation to hold youth who have been transferred to the adult system in juvenile facilities instead of adult facilities, and we should be encouraging other states to follow suit.

Second, Congress should reauthorize the Juvenile Justice and Delinquency Prevention Act (JJDPA). The JJDPA was first signed into law on September 7, 1974 by President Gerald Ford and authorizes funding to states who agree to monitor and comply with four core protections for justice-involved youth. The law was last reauthorized in 2002, making it a decade overdue for reauthorization. For the first time since 2002, two strongly supported bi-partisan bills have passed both chambers of Congress (H.R. 1809 and S. 860).  The bills just need minor tweaks to be reconciled, re-passed, and signed into law by the President. Both bills extend the jail removal and sight and sound core requirements to keep youth awaiting trial in criminal court out of adult lock-ups and to ensure sight and sound separation in the limited circumstances where they are held in adult facilities.

We should also reduce our reliance on incarceration, even for youth who have committed more serious crimes. We know that alternatives to incarceration, such therapeutic programs that engage families as part of the treatment process, actually reduce recidivism. Recent polls show that a majority of Americans believe that we should be investing in rehabilitation and treatment programs rather than incarceration. Connecticut recently closed its remaining youth prison, becoming the first state in the country to close all of its youth prisons. While other states should follow suit, it is also important that we urge states to ensure youth aren’t being placed in adult facilities when youth prisons are no longer an option. It is critical that we urge our lawmakers to take all necessary steps to protect vulnerable youth; what better time to do this than during Sexual Assault Awareness Month?