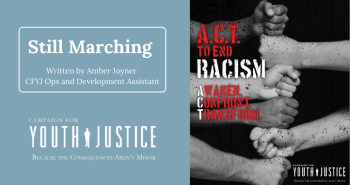 123 lives lost (that we know of) since the murder of George Floyd. Read that again. 123 lives lost, families forever changed, and communities in mourning.

The air felt hot, full of smoke, people were running from either tear gas being sprayed by the police, smoke bombs, or their batons. If you looked at the scene you would think it was the 60s or 70s. 100s of men in full military armor, guns loaded and pointed at a crowd full of people, a public outcry of grief, anger, and desperation for a change, for our humanity to be recognized…

This was a moment, a snapshot, a memory that will forever be etched in my brain. I would tell my children one day that I marched for liberation, for our humanity to be recognized while my life was threatened by military police, secret service, DC Metropolitan Police, and countless other armed police forces in riot gear.

Pre-Ferguson, I personally didn’t think I would spend the majority of my young adult years marching and protesting, simply for my humanity to be recognized.

But here we are in 2020, still marching and demanding justice for the murders of our people.

However, within these moments we find joy in community, joy in resistance, joy in fighting for our voices to be heard.

We stand strong. We believe that civil disobedience may be the strongest form of resistance during the birth of this revolution.

The most disheartening part of this revolution and process is the fact that many White and non-black POC people didn’t realize how dire our situation is until our screens were inundated with images of black people being killed on camera.

It doesn’t matter if a black person resists the police or even if they are guilty of something, a person does not deserve to die for that.

I am a Black Woman. I am a Black Cis-gendered woman. I am black woman law graduate. And as I march for my liberation, our liberation, I question how I can use the privileges that encompass my identity, the intersectionalities of my identity, to fight for change. As I protest and march for every new black body that is murdered by the police, I’ve been skeptical. I think we’ve all been skeptical.

Have protest movements become a fad, the new coolest thing to participate in and to do, or are they actually effective?

I think now more than ever we can see their success.

Since the outcry for justice after the murder of George Floyd and so many other souls we have lost, the revolution has seen a number of changes.

According to CNN, we have seen reforms to police funding, officer accountability, and SRO presence in our schools.

We have seen confederate statues pulled to the ground and the private sector respond to public pressure by vowing to do anti-racist work, and countless people of every color and creed shouting that Black Lives Matter.

We’ve seen nationwide protests on a daily basis for almost two months, demonstrating a longevity that pushes back against the idea that this movement is a passing trend. We’ve seen an oppressive government do everything in their power to pacify us - yet the revolution goes on.

I think the most difficult part of continuing to march and protest is wondering how long it will take until we are mourning another life and another name.

It’s easy to feel ultimately powerless, but so far our efforts are not in vain.

So we press on. VICTORY WILL BE OURS…