Use Your Voice and Vote Youth Justice 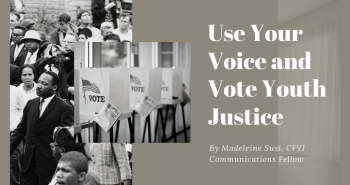 On March 21st, over fifty-five years ago, the course of history was changed. In a landmark march from Selma to Montgomery, Alabama during the Civil Rights Movement, African American men and women fought for their fundamental right to vote. Over 25,000 people, led by Martin Luther King Jr., gathered to battle the years of injustice and inequality that had tried to silence them. Despite the endless obstacles that were put in their way, these advocates were finally able to secure the passage of the Voting Rights Act of 1965.

Though many risked their lives to fight for our fundamental rights, there continue to be restrictions on who is able to exercise their right to vote. After the regressive Shelby County v. Holder decision four years ago, several states passed voter suppression laws that disproportionately prevented minorities, the elderly, and youth from voting. In response to these issues, the U.S. House of Representatives passed the Voting Rights Advancement Act of 2019 in December to protect the right of all Americans to vote and to address these discriminatory practices; however, the bill has not advanced in the U.S. Senate. Despite these advancements, many states still have photo identification requirements, voter registration challenges, and felony disenfranchisement laws, all which continue to restrict the ability of many people to vote.

With this in mind, it is increasingly important to stand beside those who have been blocked from these opportunities and to use your vote to make changes that promote equality and justice. This means we all need to #voteyouthjustice this year! As of 2018, at least 76,000 youth are prosecuted in the adult criminal justice system each year solely because of their age. While the Raise the Age reforms have brought our nation closer to an agreement that 18 should be the minimum age that youth are considered adults, every state still excludes some youth from juvenile jurisdiction. Furthermore, youth of color disproportionately face harsh punishment and transfer into the adult system. Though these problems, and many more, exist in the criminal justice system, we have the ability to advocate for youth justice reform. As the brave men and women of the civil rights movement fought for their rights, it is crucial that we use their successes to advocate for youth justice today.

Over the next few months, take time to honor those who, in the face of extreme adversity, not only shaped the future of our nation but gave us the tools and rights to do the same. Use your voice, stay involved in local and national elections, and remember to #VoteYouthJustice!