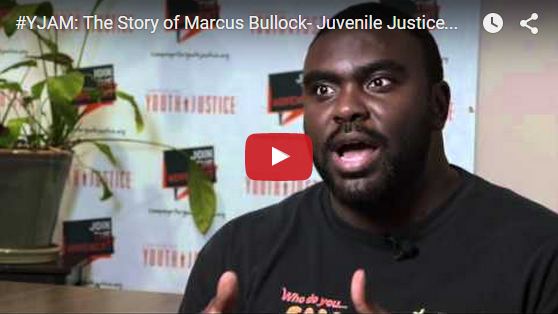 This theme for this year's Youth Justice Awareness Month is, "The Power of Sharing Stories". All month long CFYJ will share stories of youth and family members that have been impacted by the adult criminal justice system. This week we share the story of juvenile entrepreneur and justice advocate Marcus Bullock.

Marcus grew up in the DC metropolitan area. At the age of 15, he participated in a car jacking and got away with it, initially. Not surprisingly, given his age and what we know about teenaged brains—that their evolving development leads teens to be impulsive, seemingly invincible, and strongly influenced by their peers—it makes sense that Marcus failed to understand the ramifications of his actions. The next day, Marcus got arrested while committing another crime. He was charged as an adult and sentenced to eight years in prison--until he was 23 years old. According to Marcus, “I wasn’t ready for that experience; no child is. To be thrown into a facility with adults, when you are still a child who is still developing is detrimental. The “psychological warfare” was present every day in an adult prison.  Trying to grow up healthy in that space that is meant to contain you will handicap any young person’s development."

His positive attitude, he says, is what helped Marcus be successful after prison. Marcus, a natural entrepreneur, had to work his way from the bottom to the top. He started out painting kitchens for people, to opening a paint store, to then expanding it into a full-fledged remodeling company. Not forgetting the isolated feeling of prison, he took his business experience to launch a web and phone app called Flikshop, which is used to connect families to loved ones who are incarcerated. His advice to the other young people who are incarcerated is to, “keep your outside world connections strong; it will put you in a better position to be successful when you re-enter society.”  Marcus continues to run both businesses, while also teaching entrepreneurship skills to youth in detention in D.C.