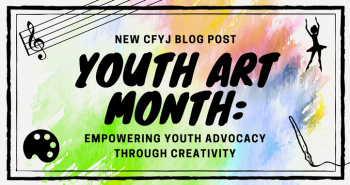 Creatives across the country are celebrating Youth Art Month during the month of March, and whether it’s visual, written, performed, or experienced, art has served as a critical tool for empowerment and advocacy among individuals and families impacted by incarceration. The Carolina Youth Action Project is just one of many great organizations across the country helping youth channel their creativity into action for issues close to them—like youth justice. We’re excited to share written pieces from two young people involved with the Carolina Youth Action Project who responded to the question: “What’s something you wish people knew or understood about prisons?”

Something I wish people knew or understood about prison…

I wish people knew what prison is like. To be taken away from your family, to be forced to bend over naked and cough in front of police officers or being raped by inmates or guards.

I wish people understood that no matter what a person has done to end up in prison, that they are still a human being.

I wish people understood the sadness other people feel while people locked up. I wish people knew how it feels to have tampons and pads taken away from them and being forced to use tissue or just having to bleed because they don’t have enough money.

I wish people knew how it feels to be forced to miss a meal, to be forced to wear the same thing every day, not being able to shower most of the time because of a lack of money for soap or being in solitary confinement.

I wish people understood the feeling of being forced to work for less than five cents an hour.

I wish people understood that the people who are in prison are still human beings at the end of the day.

Something I wish people knew or understood about prisons…

People have little knowledge about how America’s justice system works. People stand up and recite the pledge of allegiance everyday and end it with “liberty and justice for all”. Of all the people in my family, only my older sister and I share a distrust for the police, prisons, and the government. The rest of my family is blind to this system of injustice. They say they are not hateful and that they are understanding, but I see them uphold racism, homophobia, and classism.

Like the rest of my family, many people I meet wen I am participating in activities outside of school and in school uphold these ideas too. When I express my beliefs about prisons, which are always in a negative connotation, people ask me “what about serial killers?” “How are we supposed to be safe?” and other questions that are rooted in ideological oppression. I constantly argue with my family and other people about why prisons are a force of oppression.

People can’t seem to understand that prisons are not here to keep us safe. They are here to keep people under control. They were designed not to rehabilitate and reintegrate people, but to throw them away and destroy their future and their identity as a member of society. Yet people still wonder why the majority of people in prison are Black folks, Indigenous folks, People of Color, Queer and Trans folks, and poor folks. They make up excuses to justify prisons when it is clear that prisons are not effective. People do not understand that prisons and the police will not serve them justice either.

People put their full trust in the police when an act of violence is committed against them, but they don’t know that the police won’t always trust them or even listen to them. A lot of the time I see that people refuse to acknowledge that there are alternatives to prison. They think some crimes are too violent for prisoners to reintegrate into society.

I wish something people knew prisons were designed to dispose of people, not to protect and restore people.