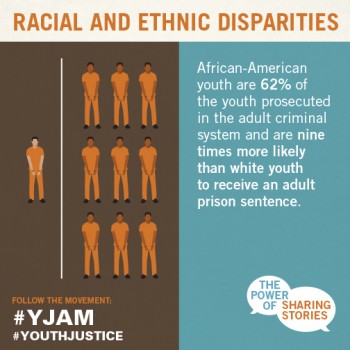 Mental Health Needs and Treatment While in the System

We start with a new report finding that the transfer of youths to the adult system is responsible for some of these inequalities. The report was published in a September bulletin by the Department of Justice, and uses data from 1,715 youth from Cook County, Illinois, who were processed in both the adult and juvenile systems. Once committed to adult facilities, minority youth are less likely to receive treatment for mental health issues, harming youths’ ability to rehabilitate.

As with other stages of the justice system, the trial of youth as adults discriminately affected youth of color in the sample: 94% of youth in the adult system were youth of color, and more than two-thirds (68%) of the youth were African-American, according to the data. For comparison, African-Americans comprise just 26% of the general population of Cook County, Illinois. These unequal outcomes persist even when the authors controlled for the type of crime.

The overall sample of delinquent youth, which included 1,440 in the juvenile system, was less disparate than the transferred youth:  83% were youth of color and 54% were African-American. This suggests the stage of transferring youth to the adult system contributes significantly to the already significant racial inequality in rates of youth incarcerated as adults. In other words, race seems to influence which youth are transferred to the adult system.

Past research found that minority youth are less likely to receive needed mental health treatment in juvenile facilities, but the DOJ report is the first to consider such treatment for youth in the adult system. The new research finds that factors like race that dispose youth to adult transfer are the same factors that dispose youth to missing out on much-needed mental health problems while incarcerated. The authors express concern that this failure to treat incarcerated youth, who have a “substantial need” for mental health services, may ignore underlying causes of disruptive and anti-social behavior.

The report’s findings prompt three concerns that may be productive focal areas for future reforms and research. First, psychiatric and behavioral treatment is unavailable to many youth who need it, and best practices must be developed for youths in the adult system. Though treatment guidelines have been developed for both youth and adults in age-appropriate facilities, little is known about what works best for youth in adult facilities. Second, the report found staggeringly high rates of mental health issues in all system involved youth, and higher rates among youth than among adult offenders. Imprisonment as an adult brings life-long consequences, and this burden should not be borne by youth who are already struggling with treatable disorders; rather, the authors suggest that mental health be considered during sentencing, and clinicians be allowed to suggest alternative interventions to the court.

Finally, racial discrimination in the criminal justice system, especially for youth transferred to the adult system, causes the punishment to reflect the race of the youth instead of the nature of their crime. More research on racial inequality in juvenile justice, including youth transferred to the adult system, will be available in December with the publication of “Race and Ethnicity in the Juvenile Justice System,” a book from the Carolina Academic Press.

Scrutiny of racially disparate outcomes in every stage of the criminal justice system has grown in the past year, as pressure from protesters and the press mounted in response to publicized police violence. This week, YJAM focuses on racial and ethnic disparities that exist in every aspect of the criminal justice system. From the courtroom to the cell block, we will learn how racial biases and disparate treatment play out in the system.