On February 13-14, the Committee on a Prioritized Plan to Implement a Developmental Approach to Juvenile Justice Reform, under the direction of the Committee on Law and Justice (CLAJ), will hold its second meeting where the committee anticipates discussing access to and the quality of counsel, the role of State Advisory Groups, family engagement, and racial and ethnic disparities. This meeting will also discuss the role of the Office of Juvenile Justice and Delinquency Prevention (OJJDP) within the larger Office of Justice Programs at the U.S. Department of Justice, and the Juvenile Justice and Delinquency Prevention Act Reauthorization. CJJ Executive Director Marie Williams, J.D. will present on the role of State Advisory Groups on February 13.

The meeting will take place at:

States seeking to develop or improve policies and practices that divert justice-involved youth with behavioral health disorders to appropriate community-based programs and services are encouraged to apply for a new Integrated Policy Academy initiative.

Up to five states will be selected to participate in this effort based on their commitment to improving policies and practices for these youth. Throughout the duration of the initiative, selected states will receive technical assistance to guide the establishment of sustainable models and strategies for diverting youth with behavioral health disorders as early as possible. This initiative will focus specifically on school-based and probation-intake diversion strategies, with special emphasis on:

Last week, the Justice Policy Institute released a new brief titled, “Virginia’s Justice System: Expensive, Ineffective, and Unfair.” The brief examines trends in incarceration in Virginia, delving into topics such as racial disparity and drug laws. According to the brief, Virginia has the 8th highest incarceration in the United States, making it even more pertinent that these disparities be addressed.

YOU ARE INVITED! JOIN CFYJ for #YJAM on Oct 2nd as “We Burn Down The House”

October is rapidly approaching and so is Youth Justice Awareness Month! Youth Justice Awareness Month (YJAM) is an opportunity for communities, families, youth, and allies to host community-led actions and events that expose the consequences of children being processed in adult court and placed in adult jails and prisons. With events happening throughout the country, YJAM is not only a time to raise awareness but also a time to build collective action, to strengthen relationships with other advocates, and to join local advocacy campaigns working to create policy changes.

It’s Friday, which means one thing – it’s time to pick the final winner of the #Playground2Prison snapshot contest! Every week, during Youth Justice Awareness Month, people have submitted snapshots telling us why they fight for youth justice. The winning submissions receive, a YJAM goody bag including great YJAM swag: a Childhood Interrupted DVD, YJAM bracelet, Playground to Prison poster, and a YJAM tote.

The criminal adult system is no place for a child. In America over 250,000 youth are tried, sentenced, or incarcerated every year. Many people are shocked at the statistics of the youth incarceration rate, but not many are willing to advocate, lend a voice and take action. Across the U.S. there are laws and policies that are harmful to children and place them right into adult jails and prisons where they rarely have access to education and rehabilitative services.

Today, October 23rd is Girls Justice Day and as it approached I kept thinking about the girls and young women who I have come to know over the last few years, who are or were involved with the Juvenile Justice system. Their stories are as diverse as they are, but one thing that remains constant is the way in which their early lives have been shaped for them by abuse, neglect, violence and the betrayal of their trust by the very people whose job it was to love and protect them. Their experiences are unthinkable to most of us and yet it is essential that we see them not as victims or “bad girls” but as courageous and resilient survivors that need support in order to heal.
You can get to know some of them on our website at NationalCrittenton.org.
Girls are an invisible part of the juvenile justice system but sadly their numbers have increased steadily over the past several decades, rising from 17 percent in 1980 to 29 percent in 2011. Most of these girls, up to 73 percent, have histories of physical and sexual violence, which precedes their entry into the criminal and juvenile justice system. A study of 319 girls in the juvenile justice system in Florida found that 64 percent reported past abuse, including 37 percent reporting abuse by a parent; 55 percent reporting abuse by someone other than a parent; and 27 percent reporting both types of abuse.

Compounding their exposure to violence and abuse is the fact that girls are more likely than boys to be arrested for “status offenses” and often receive more severe punishment than boys. Status offenses are behaviors that would not be considered offenses at the age of majority, such as skipping school, running away, breaking curfew and possession or use of alcohol. Girls who are in the Juvenile Justice system need gender-responsive, trauma-informed services to heal from the violence and toxic stress they have experienced.
The Juvenile Justice and Delinquency Prevention Act (JJDPA) has provided direction and support for state juvenile justice system improvements and has significantly contributed to the reduction of juvenile crime and delinquency. Of particular importance to girls is support of the “deinstitutionalization of status offenders” or “DSO provision.” The JJDPA also requires states to assess how their juvenile justice programs are serving girls and taking steps to implement gender responsive plans to better serve them. So make a difference today by encouraging Congress to reauthorize the JJDPA at increased funding levels…really, it’s the least we can do.
Click here to sign the petition.
Just imagine for a minute how you would feel and what you would do if you learned that your child had been the victim of abuse – wouldn’t you do everything in your power to make sure they received the support they needed and to advocate for justice?
Now imagine that you are the child and you have no where and no one to go to……
Take action, make a difference, don’t let girls in the juvenile justice be invisible.
Join the conversation, here is how:

It’s Friday, which means one thing – it’s time to pick this week’s winner of the #Playground2Prison snapshot contest! Every week, during Youth Justice Awareness Month, the winner of the snapshot contest will receive a YJAM goody bag including great YJAM swag: a Childhood Interrupted DVD, YJAM bracelet, Playground to Prison infographic poster, and a YJAM tote.

We received some great snapshots from the University of Maryland's Hillel YJAM event. This week's contestants made signs indicating what youth justice means to them.

This week’s winner is Shana Frankel! 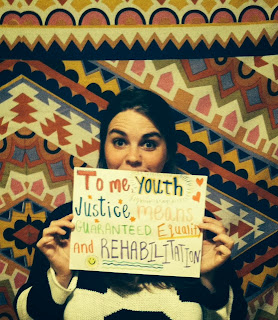 We want to congratulate Shana on her awesome snapshot demonstrating her support for ending #Playground2Prison and on receiving YJAM swag.

There are are only 2 more chances to win your own YJAM swag this year! Submit photos to This email address is being protected from spambots. You need JavaScript enabled to view it. or on Facebook or Twitter. Don’t forget to include #Playground2Prison so that your snapshot will be considered for the winning photo of the week.

It’s Friday, which means one thing – it’s time to pick this week’s winner of the #Playground2Prison snapshot contest! Every week, during Youth Justice Awareness Month, the winner of the snapshot contest will receive a YJAM goody bag including great YJAM swag: a Childhood Interrupted DVD, YJAM bracelet, Playground to Prison infographic poster, and a YJAM tote.

We received some great snapshots from this year’s first YJAM event at a happy hour fundraiser in DC. Guests posed with posters created by the Campaign for Youth Justice’s fellows and made signs indicating why they believe we need youth justice reform.

This week’s winner is Marcus Bullock! 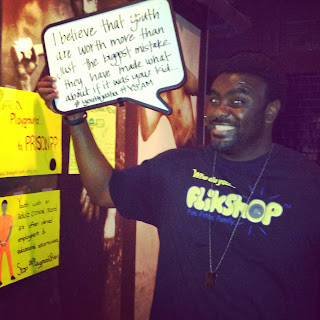 We want to congratulate Marcus on his awesome snapshot demonstrating his support for ending #Playground2Prison and on receiving YJAM swag.

There are still 3 more chances to win your own YJAM swag this year! Submit photos to This email address is being protected from spambots. You need JavaScript enabled to view it. or on Facebook or Twitter. Don’t forget to include #Playground2Prison so that your snapshot will be considered for the winning photo of the week. 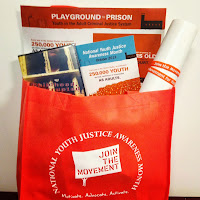 Youth Justice Awareness Month (YJAM) is in full swing! Throughout October, local partners will be hosting YJAM events raising awareness and taking action to end the incarceration of kids in the adult criminal justice system.

To continue awareness efforts, CFYJ wants to give you a chance to walk away with some YJAM swag! Whether you’re attending a YJAM event in your state or if you’re following the YJAM actions online, we want everyone to have a chance to take action during Youth Justice Awareness Month!

Check out the details on how to participate:

Need messages for your #Playground2Prison snapshot? Let us know and we can send you templates!

Remember to get creative! Each week Campaign for Youth Justice will select a winning photo and send that person their very own YJAM goody bag! Show your support for youth justice reform and join us in ending the #Playground2Prison. 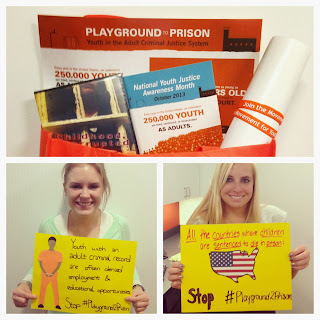