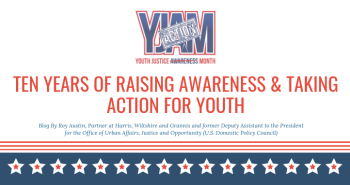 By Marcy Mistrtett, CEO of the Campaign for Youth Justice and Roy Austin, Partner at Harris, Wiltshire and Grannis and former Deputy Assistant to the President for the Office of Urban Affairs, Justice and Opportunity (U.S. Domestic Policy Council)

Today is the first day of October, and the launch of the tenth anniversary of Youth Justice Action Month (YJAM). YJAM began with one mother whose 17-year-old son tragically took his life in an adult prison in Missouri. Since then, this month marks a time when communities across the country take action against inhumane and harsh treatment of children in the justice system.  In 2015 and 2016, the Campaign for Youth Justice worked with the Obama Administration’s Domestic Policy Council on proclamations issued in honor of YJAM and the progress made on behalf of young people who come in contact with the justice system.  In the 2016 proclamation, President Obama called on all of us to “affirm our commitment to helping children of every background become successful engaged citizens.”

This call to action resonates with us now more than ever.  Youth crime is at a forty-year low and fell most rapidly when we reduced the number of youth who were held in secure detention—debunking the idea that “getting tough on kids” was needed to drive down crime.  We now know better.  Research has shown us that investments in community programs and age-appropriate supports, not secure confinement, is what helps children get back on the right path.  When we make smart investments—in education, employment, mental health, and family supports—our children do better.   These investments are particularly important in communities of color, who are often over-policed and under-resourced, where African American, Latinx, and Native youth are incarcerated more frequently and otherwise punished more severely for the same behavior. This is particularly critical for the 75,000 youth a year who are charged as adults, and who face adult penalties and consequences.

Twenty-five years ago, we began our work together, fighting for justice at the University of Chicago’s Mandel Legal Aid Clinic, under the leadership of recently retired Professor Randolph Stone, advocating for the first mass wave of children who were transferred to adult court.  Over the decades, one of us worked as a social worker and community organizer, while the other prosecuted family violence and civil rights cases.  Too often, our careers crossed paths over a common injustice.  While our passion has not changed, the conversation has.

To make YJAM successful, we need your help in ensuring that children have the opportunity to grow into productive and engaged citizens.  Elections are Nov 6.  The current Administration has called for more investments in law enforcement, in targeting children fleeing to the US seeking asylum from violent circumstances in their home countries, and has unraveled protections put into place to ensure that states are not disproportionately locking up black and brown children.  To counter this damaging narrative and to get back on track with what we know works for young people, victims, and communities we need you to #VoteYouthJustice this October.  Locally, our judges, District Attorney’s and Sheriffs need education about adolescent development; they need to be held accountable for not incarcerating children who aren’t a public safety threat; and they need to agree that children are children, not adults, and shouldn’t be treated as such.  Armed with research, facts, and personal stories our communities can support youth and build public safety.  Our state and federal elected officials also need to be held accountable to ensure laws such as the Juvenile Justice and Delinquency Prevention Act are authorized and funded; and that states participate in the JJDPA and commit to building fair and just systems of care for our children.

We know that when communities come together and fight for justice, great things can happen.  Let’s use the tenth anniversary of YJAM to come together to, in the words of our 44th president, “ensure all young people are supported, nurtured, and provided an opportunity to succeed.  We must make sure youth in every community and from every walk of life can be known for more than their worst mistakes….and live up to the full measure of their promise.”  Help us circulate the #VOTEYOUTHJUSICE petition to commit to take action during YJAM to protect children and our future.