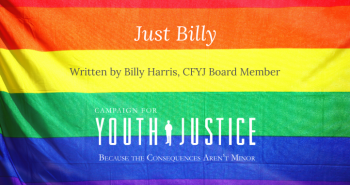 Being incarcerated at the age of sixteen has many inherent nightmarish realities of its own. Also being a gay youth struggling with self-identity issues made it a living nightmare that I often felt would crush me.

I was forced to hide my true identity in order to navigate an environment that only respects masculinity. My survival hinged on the ability to become extremely hypervigilant, allowing me to spot potential dangers from afar and avoid the predator’s traps. It was a constant, never-ending battle of self-loathing, depression, and anxiety. The mental anguish was all but unbearable for the next fifteen continuous years.

Finally earning parole at age 31 and returning to society appeared to be an end to my battles. I believed it would be a chance to move on with my life and begin to really live. However, I quickly realized that the same hatred I’d seen projected toward gay individuals as a youth - experiences that created my self-identity issues to begin with - still persisted throughout society, and especially in the small Missouri town I grew up in and was forced to parole back to. So, I continued to hide my true identity in an effort to fit in. Yes, I did get to experience a few intimate relationships along the way, but they always needed to be carefully planned so as not to raise suspicions amongst my so-called friends and family members. I was still living in the shadows. Still feeling like only half a man.

I know I’m not the only person to have lived these experiences. There are thousands, maybe millions of LGBTQ people whom endure similar, and even more vicious circumstances every day. It can become overwhelming when I think about it. But the recent SCOTUS decision which determined that the 1964 Civil Rights Act protects LGBTQ folks in the workplace is uplifting. I tend to lean more to the liberal side of law and policy, so seeing such conservative-minded white men such as Chief Justice John Roberts and Justice Neil Gorsuch side with the human rights of people like me gives me hope. Hope that we can all live in harmony. Hope that the LGBTQ community can live without fear of being targeted by bigots. Hope that LGBTQ children can grow up with a sense of dignity and self-worth. Hope that one day we will no longer be defined by our sexuality. Hope that one day we will all be seen as normal, decent human beings.

The hypervigilant survival mechanism I developed as a result of my incarceration still persists with me today. It has led to a habit of psychoanalyzing every encounter, every relationship, and all too often leads to me distancing myself from others, heightening my sense of aloneness. I only recently gained the courage to come out publicly about my sexuality. I had always rationalized that it wasn’t relevant to my identity unless I was pursuing an intimate relationship. But that was a lie. After 49 years of living in the shadows, I finally made the choice to be myself. Unapologetically. My hope is that by sharing my story I can help someone else see their own self-worth and believe in themselves. Everyone deserves to be happy being their true self. My hope is that no other LGBTQ youth waits 49 years to be themselves.

Whenever I reflect on my life growing up as a gay male within a society of hate and disregard, and I begin to feel unloved and unseen, I sing one short verse from my all-time favorite artist, Elton John, to myself. “I’m Still Standing!”