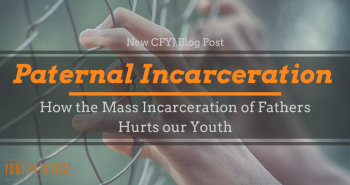 Youth justice is all about looking at the bigger picture. We understand that children thrive when they are raised in the context of their families and communities. Yet, more than 1.5 million children lack access to their fathers, due to the mass incarceration of, particularly, men of color.  This is especially damaging to children of color, as recent research by the National Center for Health Statistics has shown that Black fathers, regardless of their marital status, are more involved in their children’s lives than any other demographic.  So, as Father’s Day approaches, let’s remember all the reasons the world needs dads at home with their children, not in prison.

II: How We Got Here

Tough-on-crime policies in the 1970’s and 1980’s, the War on Drugs, the fear of child “superpredators,” and more recently, the rising tide of xenophobia have all contributed to the continued practice of mass incarceration. The War on Drugs, and the enforcement of mandatory minimum sentences that followed, were particularly important to the exacerbation of racial disparities that exist within the incarcerated population. While Black and Hispanic people make up only 30 percent of the United States population, they represent 59 percent of the prison population. According to 2010 Census data, 450 white Americans per 100,000 are incarcerated, while 2,306 black Americans per 100,000 are incarcerated. If you add probation, nearly 1:3 black men in the USA will find themselves under some sort of court supervision according to The Sentencing Project. As a result, millions of particularly Black and brown children currently live, or at some point in their childhood have lived, with a father incarcerated or under the supervision of the criminal justice system.

III: What This Means for Children

The children who lose their fathers to incarceration are severely impacted by the absence of a paternal figure. Research shows that paternal incarceration negatively affects children on three levels: trauma, shame, and stigma. Because of economic and social stressors faced by families with incarcerated fathers, children may grow up without the nurturing care and guidance they need; they may also grow up with unstable housing, insecure food sources, and lack of access to quality medical care once their fathers are removed from their lives. Furthermore, the trauma associated with the arrest of a loved one, and their removal from the household may leave children with lasting social and behavioral issues. And the cost of staying connected to their father while he is incarcerated also falls heavily on families, further stretching resources (money for commissary, phone calls, visits, medical care, etc.). These same economic issues can also cause families to move to less safe neighborhoods, in which children have limited access to after-school programs and other resources that are important to their healthy development.

These youth are also more likely to face shame and stigma at both the community and institutional level. Children can experience discrimination when teachers, other students, and members of the community learn about the child’s familial circumstances. Institutionally, families can be denied loans or access to housing when others learn that the father is serving time in prison. These limitations do not end with the prison sentence, as formerly incarcerated people are too often denied access to public housing, SNAP benefits, and other vital resources for survival.

This confluence of the effects of paternal incarceration on families leads to a higher chance that these children will one day find themselves in prison as well. Research shows that children impacted by paternal incarceration suffer from higher rates of delinquency and are more likely to have a run-in with the law, which, especially for youth of color, can lead to incarceration. Therefore, our work to keep youth out of the adult criminal justice system must also keep fathers in mind, as the practice of mass incarceration irrevocably harms youth and perpetuates a generational cycle of incarceration.

IV: What Can be Done?

So what can be done to protect children and youth with fathers in prison? First, and most obviously, implementing alternatives to incarceration would cut this problem at its source. If reforms are created that allow for offenders to complete their sentence outside of prison, through restorative practice, work release, community service, or probation, they would not be separated from their children, limiting the intergenerational cycle of incarceration. There is some good news on this front. The rate of incarceration and the US prison population has been decreasing since 2007, but the number of absent fathers remains far too high, especially in communities of color where close to one-quarter of all fathers have been, or currently are, incarcerated.

Additionally, we must provide better support services for the children left behind by incarcerated fathers, so that the trauma, shame, and stigma from paternal incarceration do not lead to worsening behavior and delinquency. Rather than punish the entire family of the father through blocked access to resources and economic hardship from the lost income, we must wrap our arms around these families and offer them much-needed assistance.

Finally, when children and teens do end up in the criminal justice system, we need to approach them with compassion and consider the circumstances, such as paternal incarceration, that may have led these youth to the justice system. Then, rather than locking children up and throwing away the key, we must focus on rehabilitation, so that they can be present and supportive fathers to their future children.