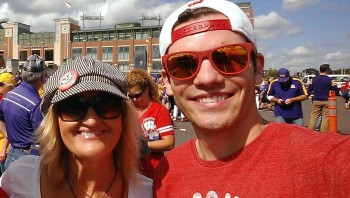 Being a mother of a convicted felon and registered sex offender has changed my life. Although I feel more than fortunate that our son is alive, healthy and now home with us, there is a sense of loss from the years that were taken from us.

Mad. I am angry that when our son just turned 15 and committed a crime, the law allowed him to be treated as an adult.

Overwhelmed . Every time we went into the court room I had a pit in my stomach. I knew he did too.  I feel as though we did a dance……If he showed worry, sadness or fear, I was stronger and  took the “lead”. When he sensed I needed support he took the “lead” and stayed positive. There were no words between us about this dance. I never wanted him to know how truly terrified I was or for him to feel anymore shame than he already felt for his actions. He never wanted to appear afraid as he knew I then would worry more. Trying. 3 ½ years after being arrested he was sentenced to prison. The waiting and wondering what was going to happen was painful. Going to court sometimes weekly for months on end and still not having a conclusion. I began to live a very different life. Other than my close support system, I could not tell people what was going on. I was in hiding and hoping no one asks anything about my child. I knew I would break down. I questioned who I could trust. Did I dare share with them what I was going through?  The simple task of grocery shopping, errands or going to church became daunting because I hope d I would not see anyone I knew because I was afraid of possible questions, looks and judgementjudgment. Always feeling this way and yet pretending everything was going to be okay for my family. Helpless. As his parent, I no longer had a voice in the adult courtroom. How do I help my child? EVERY day I was afraid for him. Every day I was worried for him and Every day I fought for him and hoped it would make a difference.Emotional.  A roller coaster. Difficult to be plugged in where I needed to be because the worry and fear consumed me. It was a dark cloud hanging over everything I did. First my son was going through the adult judicial system as a child. Second, he was sentenced to prison with hardened criminals. There was no silver lining.Resilient. I had to be. There was no choice. I could not give up the fight for him to be treated as fairly as possible now in the adult system. Today, it is still the same.  I worry about his probation, being a felon and being a registered sex offender for a crime he committed at 15.  I support him with all of me and continue to fight for his rights. A gift from my sister reads: "YOU ARE THE BRAVEST WARRIOR GODDESS I KNOW”. This was not a choice. I am his Mom and that is what Mothers do!