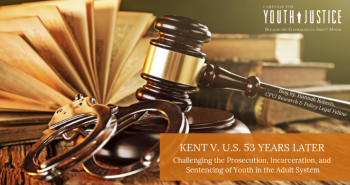 The Juvenile Court judge did not rule on these motions. He held no hearing. He did not confer with petitioner or petitioner's parents or petitioner's counsel. He entered an order reciting that after "full investigation, I do hereby waive" jurisdiction of petitioner and directing that he be "held for trial for [the alleged] offenses under the regular procedure of the U.S. District Court for the District of Columbia." He made no findings. He did not recite any reason for the waiver.

Throughout the opinion, the Court seems deeply concerned by the lack of individual consideration and process given the critical nature of waiving a youth to adult court.  The Court overturns the Court of Appeals decision finding that the lack of a true full investigation prior to the youth’s transfer to the adult system violated D.C.’s Juvenile Court Act.

Since the Kent decision several trends have emerged in litigation involving youth in the adult system. The most common challenges involve the constitutionality of transfer provisions, challenges contending that newly enacted reforms should apply retroactively, and challenges to adult sentences imposed on youth.

Litigators across the country have attempted to challenge transfer provisions on a number of constitutional grounds.  In State v. Aalim (Aalim I), a youth raised Due Process and Equal Protection challenges to Ohio’s mandatory waiver provision. He argued that the statute’s failure to consider youth as a mitigating factor, its failure to account for the attendant characteristics of youth, the lack of opportunity for a young person to demonstrate a capacity for change and rehabilitation, and the irrebuttable presumption in favor of transfer violated the basic principles of fundamental fairness required by the Due Process Clause. He also claimed that the statute—which required the transfer of  youth charged with certain offenses who are 16 years and older to adult court while transferring youth age 14 and 15 to adult court only if they had previously been adjudicated delinquent—created two classes of similarly situated youth that are treated differently solely because of their ages in violation of the Equal Protections Clause. Aalim also contended that one’s status as a juvenile is a suspect class and that mandatory transfer statutes do not pass Constitutional muster.

Drawing heavily from case law interpreting the Due Process Clause of the U.S. Constitution, the Ohio Supreme Court concluded that the Due Course of Law Clause of the Ohio Constitution (the state equivalent of the federal Due Process Clause) mandates individualized assessment of a particular youth’s capacity for change and rehabilitation before transferring that youth to adult court. Because the statutory transfer scheme does not allow for such an individualized assessment, the court struck down the transfer statute.

However, in a devastating blow, the Supreme Court of Ohio reversed itself less than a year later in Aalim II after new Justices took the bench.  Taking a historical approach to Aalim’s claims, the court concluded that the state and federal fundamental fairness guarantees found in the Due Course of Law and Due Process Clauses do not encompass “a substantive right to a juvenile-court proceeding.” Because these clauses predate the creation of a separate juvenile court system, the court reasoned, an amenability hearing cannot be “’deeply rooted in this Nation’s history and tradition’ and ‘implicit in the concept of ordered liberty.’” Additionally, the transfer hearing, at which Aalim was represented by counsel and the court explained why it no longer had jurisdiction over Aalim, satisfied the fundamental fairness requirements in the eyes of Ohio’s highest court.

Unfortunately, other court have also rejected constitutional challenges to transfer provisions despite creative and compelling arguments.  For example, in Perkins v. Commonwealth, a Kentucky youth charged as an adult under a judicial discretion scheme argued that his transfer violated his due process rights under Apprendi v. New Jersey  as it removed a factual determination that increased his exposure at sentencing from the jury. Additionally, Perkins argued that youth should be treated as a suspect class under the Equal Protection clause and that the Due Process clause conveys youth with a fundamental right to be treated as youth. However, the court rejected both of these arguments and upheld the challenged transfer provisions. In 2018, a Tuscaloosa, Alabama trial judge cited Supreme Court cases noting the neurological differences between adults and juveniles and ruled that parts of Alabama’s statutory exclusion provision are unconstitutional. This case is currently on appeal.

One area in which litigants have had a great deal of success is in challenging the retroactive application of recent youth justice reforms. Efforts in California, Connecticut, New Hampshire, and Illinois have all been successful at ensuring those who have active cases during the passage of transfer reform have the opportunity to benefit from the reform. For example, in 2016 California passed Proposition 57 (Prop. 57), which ended prosecutorial direct file. However, a number of individuals remained in adult court after being direct filed prior to Prop. 57’s passage. In People v. Lara, the California Supreme Court ruled that the new direct file reforms apply to all youth charged directly in adult court whose judgment was not final by the time Prop. 57 was enacted.

Advocates in Connecticut, New Hampshire, and Illinois won similar victories. In State v. Nathaniel S., the Connecticut Supreme Court concluded that a 2015 amendment to their automatic transfer provision—another successful effort by juvenile justice advocates which raised the minimum age of automatic transfer from fourteen to fifteen years old—applied retroactively. Similarly, the Supreme Court of Illinois ruled in People ex rel. Alvarez v. Howard that a new law, which functioned much like the amendment in Nathaniel, applied retroactively as well. The New Hampshire Supreme Court held that its raise the age law, which raised the age of juvenile court jurisdiction from 17 to 18, also applies retroactively in State v. Fuller. This positive trend of applying transfer reforms retroactively should give advocates a great deal of hope considering the number of reform efforts taking place across the country.

Following the watershed decisions of Graham v. Florida, Miller v. Alabama and Montgomery v. Louisiana which found the imposition of juvenile life without parole for those charged with non-homicide offenses and mandatory juvenile life without parole for those with homicide offenses to be cruel and unusual punishment,  advocates have focused their sights on the next logical step: challenging long mandatory sentences and virtual life sentences imposed on youth. Some of these challenges have been successful. For example, in State v. Lyle, the Supreme Court of Iowa held that all mandatory minimum sentencing schemes were unconstitutional as applied to youth offenders. Relying heavily on the idea crystalized in Miller that children are fundamentally different from adults, the Iowa Supreme Court concluded that judges must retain the “discretion to consider youth and its attendant circumstances as a mitigating factor and to impose a lighter punishment by eliminating the minimum period of incarceration without parole.” Lyle could provide a roadmap to advocates in other states seeking to abolish statutorily mandated minimum sentences as applied to youth.

Juvenile justice advocates in Maryland used Miller and Graham to take aim at de facto or virtual life sentences imposed on youth. In Carter v. State, the Maryland Court of Appeals examined an aggregate sentence of 100 years in prison imposed on a youth, McCullough, for a single incident on a single day when he was just 17 years old. Under the terms of his sentence, McCullough would not be eligible for parole until he served 50 years, a full 35 years after an individual sentenced to life would be eligible for parole. The court concluded that the 100-year stacked sentence imposed in this case violated the Eighth Amendment under Graham, and remanded the case for resentencing such that McCullough would have a “’meaningful opportunity to obtain release based on demonstrated maturity and rehabilitation’” by receiving a “sentence with parole eligibility significantly short of the 50-year mark.”  Similar challenges have come up in California, New Mexico,  New Jersey, Illinois, Oregon, Arizona and in the federal courts.   For more information on these challenges please visit websites for the Juvenile Law Center and the Campaign for the Fair Sentencing of Youth.

Since Kent, litigators and advocates have worked tirelessly to challenge the prosecution, sentencing, and incarceration of youth in the adult system both in the courtroom and at the state house.  While not every challenge has prevailed, the pressure of transfer litigation has led to positive legislation and a notable decrease in the number of youth sent to the adult system every year.  Remembering Kent is about acknowledging both where the Court has gone and how far there is to go in terms of its treatment of youth.