The Road Ahead for Youth Justice Reform 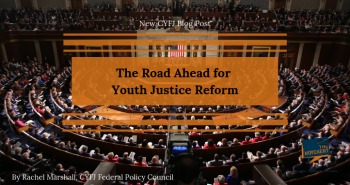 After the longest government shutdown in U.S. history, Speaker Pelosi extended an invitation to  President Donald Trump to deliver his second State of the Union Address on February 5. As we prepare to hear the President’s perspective on the state of our union, after a year that brought us both vast rollbacks and great successes on issues impacting our nation’s young people, we again wanted to outline the state of youth justice across the country. The second year of the Trump administration proved to be interesting in the field of youth justice. 2018 was the first full-year of Caren Harp’s tenure as Administrator of the Office of Juvenile Justice and Delinquency Prevention (OJJDP).

Under Harp’s leadership, there have been changes in the compliance requirements with the Disproportionate Minority Contact core requirement of the Juvenile Justice and Delinquency Prevention Act (JJDPA), additional key guidance has been rescinded relating to violence prevention, justice involved girls, the role of families in the youth justice system, reducing fines and fees, supportive programming for LGBTQ youth, and the removal of youth from adult jails. There has also been a shift of the mission of the organization--from a youth justice system that is “rare, fair and beneficial” to one focused on “Enhancing safety. Ensuring Accountability. Empowering Youth.”  There has also been a reemergence of the concept of accountability over treatment, particularly for youth painted as violent and gang involved, with special attention on unaccompanied minors. These actions particularly hurt children of color who are disproportionately exposed to and harmed by the justice system.

Despite these lows, in December of 2018 we finally saw the reauthorization of the Juvenile Justice and Delinquency Prevention Act (JJDPA) when Congress passed the bipartisan Juvenile Justice Reform Act of 2018. The JJDPA was first signed into law by President Gerald Ford on September 7, 1974 and was last reauthorized in 2002. The law remains the only federal statute that sets out national standards for the custody and care of youth in the juvenile justice system and provides direction and support for state juvenile justice system improvements. Under the newly passed legislation, the core protections will be strengthened, and critical, research-based improvements will be made that reaffirm a national commitment to the rehabilitative purpose of the juvenile justice system.

With the reauthorization of the JJDPA and the continued decrease in youth arrests and incarceration, now is the perfect time for the administration to seize the opportunity to promote public safety while strengthening protections for vulnerable youth. We hope to see the following happen in the year ahead.

1. Robust Support for Implementation of the Juvenile Justice Reform Act of 2018

When Caren Harp took the helm of OJJDP, the juvenile justice field was unsure of what to expect. While Harp has made it a point to talk to experts and practitioners in the field, she has also made several concerning statements since she came onboard. In talking about her priorities for OJJDP, she has repeatedly emphasized that there needs to be a balanced consideration when it comes to the juvenile justice system, emphasizing that it is not just about the youth, it’s about public safety and the victim. We reject the notion that juvenile justice systems ignore the victim or public safety. In fact, due to reforms that build on trauma-responsive care, adolescent development, and building out a continuum of care, youth arrests and crimes have plummeted over the past 2 decades.

In charge of implementing the new law, Harp’s outdated positions will be challenged. Critical to the reauthorization is a call on states to build developmentally appropriate responses to young people, that are trauma responsive and informed by research. Furthermore, the reworking of the Title V of the Act to focus on a broader array of prevention efforts at the local level will allow states the flexibility of addressing youth troubles prior to becoming entrenched in the justice system.

Now that Congress has reauthorized the JJDPA, it is critical that OJJDP begin the implementation process to ensure states are abiding by the reforms. Further, Congress should exercise its oversight powers to review the actions of OJJDP and to ensure the agency is taking steps to fully implement and support the changes made by Juvenile Justice Reform Act of 2018.

While we saw a slight increase in funding for federal juvenile justice programs in Fiscal Year (FY) 2018, federal support of these key programs remains critically low, hindering states’ ability to serve vulnerable youth. Now that the JJDPA has been reauthorized, we hope to see a return to robust and full funding for juvenile justice programs. Under the updated law, Congress has authorized $176 million to be appropriated for JJDPA programs in Fiscal Years 2019 through 2023 compared to the $87.5 million allocated for Titles II and V of the JJPDA in FY 2018.

Unfortunately, like many other critical federal programs, the government shutdown put juvenile justice programs in jeopardy. While the Office of Justice Programs (OJP) had funding to operate through the shutdown, email responses and the website indicated that they were not operating at full capacity. With a short, 3 week continuing resolution to keep the government open, we are bracing ourselves for the possibility of another shutdown. Shutting down OJP could have an impact on monitoring oversight, including compliance visits, and compliance audits could be put on hold or cancelled, putting young people in potential danger. It also could impact implementation of the Juvenile Justice and Reform Act of 2018. Under the new law, OJJDP, is required to review the legislation within 30 days and provide a written report to Congress thereafter. That deadline has already passed, and it remains unclear whether OJJDP has begun its analysis of the new law.

In the Senate’s FY 2019 Commerce, Justice, and Science Appropriations bill, the Senate allocated $96.5 million for the JJDPA, and these same levels were included in an omnibus spending bill that passed the House on January 3, 2019. While we are currently operating under a continuing resolution, the most recent versions of proposed FY 2019 funding bills appear to keep funding for Title II of the Act stagnant, and actually decrease the current funding for Title V of the Act. We urge the administration to support a final FY 2019 appropriations bill that fully funds the JJDPA as provided for by the reauthorization bill. In addition, as the administration prepares to submit its FY 2020 budget proposal, we urge them to request the full authorizing levels for these critical programs. Any less would be an assault against children.

In addition to the reauthorization of the JJDPA, Congress also moved several other key pieces of legislation. The Youth Medicaid Protection Act was included in H.R. 6, the “SUPPORT for Patients and Communities Act,” which was signed into law on October 24, 2018. It requires states to suspend, but not terminate Medicaid for youth (up to 21) who are incarcerated and ensures they will have access to Medicaid upon release if they are still eligible. The House also passed H.R. 68, Tiffany Joslyn Juvenile Accountability Block Grant Program Reauthorization Act of 2017. This bill, whose last authorization lapsed in 2009, updates the Juvenile Accountability Block Grant (JABG) to reflect current research and practice. Key provisions in the bill include incentives for states to use graduated sanctions and incentives grounded in positive youth development, providing enhanced anti-bullying measures, and youth violence prevention and intervention services. Unfortunately, the bill did not progress in the Senate, but it was a positive step in the right direction that would restore $30million to states to address youth justice issues.

This year, we hope to see the new Congress build upon these successes by moving the JABG reauthorization bill through both chambers and introducing bills with innovative solutions to strengthen protections for young Americans. From providing incentives to states to prohibit the incarceration of youth who commit status offenses and eliminating juvenile fines and fees, to ensuring immigrant youth are not criminalized and incarcerated solely for their immigration status, the list of areas for improvements is endless.

We have a lot of work ahead of us to ensure we build upon the victories and improvements made in the past year. Even with the progress made, the state of youth justice has a long way to go to ensure our nation’s young people can thrive. We hope the President and Stacey Abrams, who has been selected to give the Democrats’ response, give a nod to this progress in their speeches and share this vision with us. The Campaign for Youth Justice and our allies stand ready and committed to fight for our youth and advocate for the best possible laws and policies in the year ahead.