Juneteenth 2020: A Day On To Address Systemic Racism 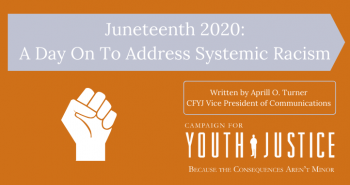 Today is the 155th anniversary of Juneteenth, also known as Freedom Day or Emancipation Day, which commemorates the effective end of slavery in the U.S. In 1865, nearly two years after the Emancipation Proclamation was signed, federal troops arrived in Texas and told enslaved people that they were finally actually free.

Activists have campaigned for years for Congress to recognize Juneteenth as a national holiday. Now, in the wake of our current climate, as racial tensions continue to remain high across the country, Juneteenth and its meaning seem to have renewed interest.

Twitter, Nike and the NFL are just some of the biggest names raising the mainstream profile of Juneteenth by giving their employees a paid holiday to recognize the date.

This is due in large part to the fact that the last few weeks have been filled with the devastating news of stories about the police killing Black people with protests against police brutality and racial injustice sparked by the deaths of Ahmaud Arbery, Breonna Taylor, Geroge Floyd and now Rayshard Brooks. At this point, these calamities feel familiar — so familiar, in fact, that their details have begun to echo each other.

Juneteenth has historically been a time for celebration rather than mourning and remembrance-- however, we are still very much mourning and combating the racial injustices that remain deeply rooted in every fabric of our society. We should use Juneteenth Day 2020 to launch new and desperately needed criminal justice system reform. Because it represents a form of slavery that never ended in America.

The rate at which Black Americans are killed by police is more than twice as high as the rate for White Americans. And this is not even the tip of the iceberg, we continue to watch Black people die at the hands of police, raising questions about how Black Americans are treated during and immediately after their arrests.

Hopefully out of pain and recent horrible events, we will be able to see some good. A start is how Black and Brown kids enter the system.

The protests over these killings have forced cities across the country to take a hard look at how police interact with mostly minority communities, especially our children. Several school districts in recent weeks have voted to end their relationships with local police departments out of concern that the officers patrolling their hallways represent more of a threat than a form of protection, and to help curtail overly harsh disciplinary policies that push students down the pipeline and into the criminal justice system.

School districts in Minneapolis, Seattle and Portland, Ore., have all promised to remove officers, with the Seattle superintendent saying the presence of armed police officers “prohibits many students and staff from feeling fully safe.” In Oakland, Calif., leaders expressed support for eliminating the district’s internal police force, while the Denver Board of Education also voted unanimously to end its police contract. Milwaukee Public Schools also will no longer fund police resource officers to patrol outside its schools,

And in Los Angeles and Chicago, two of the country’s three largest school districts, teachers’ unions are pushing to get the police out, showing a willingness to confront another politically powerful, heavily unionized profession.

Decades of activism and advocacy to remove officers from schools is taking place at rapid speed, due to a video that captures eight minutes and 46 seconds of what it looks like when the worst of our history is able to rise to the surface and power and policies are allowed to go unchecked.

Coretta Scott King once wrote, “Freedom is never really won. You earn it and win it in every generation.” As we celebrate Juneteenth, we acknowledge that the fight for a more perfect union continues. It is a fight to ensure that Black Americans are valued and can realize their full rights.

It is my hope we can use this day, a new holiday that many have learned about for the first time, as a day on, rather than a day off.  This Juneteenth can be for reflection on where we stand as a country on these issues and reassess our values.  But reflection must also be rooted in action. It is more important now than ever to stand in solidarity with the Black community and support Black Lives Matter and the struggle against continuing racial injustices.