Senators Harris and Wyden Speak Out for Incarcerated Youth 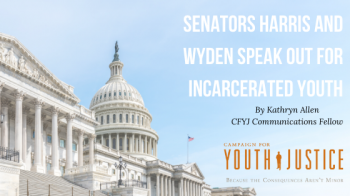 On May 26th a group of 14 U.S. Senators led by Kamala Harris (D-NY) and Ron Wyden (D-OR), sent a letter to the Office of Juvenile Justice and Delinquency Prevention (OJJDP). The correspondence outlines concerns for the protection of incarcerated youth during the COVID-19 pandemic.

This pandemic poses a serious threat to youth in the justice system.  Away from their homes and families, OJJDP has a duty to protect our incarcerated children amidst the public health crisis by issuing critical guidance, best practices, and training and support to states trying to respond to the worst pandemic in over a century. This is the second letter issued to OJJDP in May about the same issue. On May 6th, Senators Chuck Grassley (R-IA) & Joni Ernst (R-IA) were joined by Senator Sheldon Whitehouse (D-RI), in issuing a request to Administrator Caren Harp at OJJDP to provide clear guidance and direction to states during this unprecedented time.

The Senators’ letter addresses the increased chance of spread in juvenile facilities due to communal living and lack of personal protective equipment.  The Harris-Wyden letter also points out the double-edged sword of isolation - a common solution to the viral spread.  In isolation, youth are prone to mental distress and less likely to receive education or other rehabilitation services.

In addition to the spread of the virus among incarcerated youth, staff members returning to their homes and communities are also at risk. According to The Sentencing Project, as of May 28th, 508 incarcerated youth have tested positive for the novel coronavirus along with 605 juvenile detention center staff members; this is double the number of infected youth and children than when the first letter was sent only three weeks earlier. A failure to protect youth in the juvenile justice system is also a failure to protect the communities surrounding these centers.

Since the start of the public health crisis, there have been widespread complaints from the families of incarcerated youth about a lack of communication regarding the safety of their children.  The Harris-Wyden letter addresses these concerns with a detailed call for transparency and publicly-available information on the spread of the virus in youth facilities as well as what government measures are being taken to improve conditions.

The Senators’ letter also addresses the racial disparities in juvenile justice facilities that are exacerbating the effects of COVID-19 on communities of color.  As the COVID-19 pandemic has progressed, extreme disparities have been observed between racial groups, with black Americans getting sick and dying at a much higher rate than whites.  With the majority of incarcerated youth being black and brown, a failure to contain the virus in juvenile detention facilities will only further exacerbate racial disparities.  The letter ends with a demand for answers to 16 questions by June 12th, 2020.

At the Campaign for Youth Justice, we are grateful to the 17 senators listed below for speaking out for our incarcerated youth in this trying time.  We echo their call for transparency from the Justice Department and hope that their questions are answered in a detailed and timely fashion.