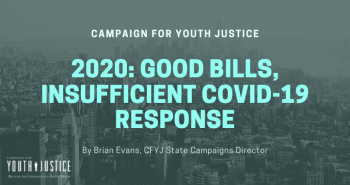 The COVID-19 pandemic, among many other things, cut state legislative sessions short, and naturally shifted attention away from policy and towards emergency responses, which have been slow and woefully inadequate compared to the scale of the crisis.

But before this happened, things seemed to be moving in the right direction: several states had already successfully passed good legislation protecting children from being prosecuted, incarcerated, or sentenced as adults.

The states at the end of the alphabet were most productive.

Utah passed and the Governor signed HB 384, legislation restricting their statutory exclusion statute to murder and attempted murder, and only for 16 and 17-year-olds, while giving judges a list of factors to consider before deciding whether a child being tried as an adult should be held in an adult jail.

Virginia eliminated mandatory minimums for children charged as adults (HB 744), provided for parole consideration after 20 years for any child convicted and sentenced as an adult (HB 35), and raised to 16 the age at which a child can be subject to “Direct File” – that is, charged as an adult at the discretion of the prosecutor with no judicial oversight (HB 477).

And Washington state passed a major bill addressing juvenile detention, eliminating solitary confinement of children and requiring children charged as adults to be housed in juvenile facilities (HB 2277). This latter provision brings Washington into full compliance with the new JJDPA jail removal requirement that became law at the end of 2018 and goes into effect at the end of next year.

New York’s state budget (S 7505), while actively and seriously harmful in its rollback of bail reform, did include a requirement that 16 and 17-year-olds convicted as adults – known as Adolescent Offenders – must be under the supervision of the Office of Children and Family Services (OCFS) by October. Currently, these children are locked up in facilities managed by DOCCS, which has resorted to widespread use of solitary confinement.

Other states left legislation on the table when their sessions were suspended.

A bill in Maryland (SB 314) that preserves confidentiality for children charged as adults while they appeal to waive their case back into juvenile court passed through the General Assembly on the day it shut down, but has not been signed by the Governor.

Nebraska was considering – though not likely to pass – LB 1117, a bill that, among other things, ended prosecutorial “Direct File”, and Iowa had bills to end the statutory exclusion of children from juvenile court (SF 2220), and to bring the state into compliance with the JJDPA jail removal requirement (SF 2279). Oklahoma had a similar jail removal bill (HB 3214) that had passed in the state House of Representatives, while Kentucky had a bill eliminating statutory exclusion (SB 87) that passed the Senate. South Carolina had a comprehensive juvenile justice reform bill, known as the Juvenile Justice Reform Act, which included a strong jail removal provision, sponsored by the state Senator who shepherded through their “Raise the Age” bill. And Georgia’s “Raise the Age” bill (HB 440) had passed its House committee.

Whether some of these states will resume their legislative sessions later this year is of course unknown.

The focus has turned almost exclusively to the pandemic, as the need for large-scale releases from the dangers of incarceration has become clear, and as advocates, health professionals, and unions organize to pressure their governors, state courts and Departments of Juvenile Justice, as well as the federal government, to bring children home with appropriate supports and services.

And while the Annie E. Casey Foundation found that the juvenile detention population across 30 states is down 24%, we know that for the youth who remain, many of whom have been charged as adults, the quarantining of incarcerated children has degenerated into de facto solitary confinement. Pushing to ensure that more of these children also get the chance to come home, and are protected while in custody, will require a collective effort from the whole field, as most state responses have been fraught with a disturbing lack of urgency.

In terms of youth justice policy, state legislatures were off to a promising start, but COVID-19 has exposed an incapacity to act boldly and quickly, even though such action is absolutely necessary to save lives. As cumbersome and inflexible as our justice system can be, the main impediment remains a lack of political will. Despite positive long-term policy advances, too many people in power don’t care enough about, or are willing to abandon, children caught up in the justice system.