A Look At District Attorney Races in Los Angeles, CA and Austin, TX 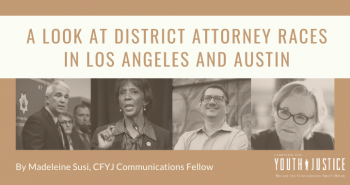 Over the past few months, people throughout the nation have been looking to the media for the latest updates concerning the largest political race in the country: the presidential election. Voters in many states have already shown up to the polls to vote in the primaries, with the biggest turn out on Super Tuesday, where fourteen states awarded a total of 1,357 delegates. The total delegate count from Super Tuesday is still coming in, but currently, Biden has pulled ahead with a total of 566 delegates and 4.6 million votes.

While attention may be focused on elections on the national level, there are also many important ongoing elections on local levels, perhaps most notably in Austin, TX and Los Angeles, CA, where the race for district attorney is heating up. Though elections for district attorney may not receive the same amount of news coverage, these races are extremely important as DA’s maintain significant discretion in what cases they will pursue and what charges they will bring.

Throughout many counties in Texas, incumbents going through re-election have faced almost no opposition. However, in Travis County, current DA Margaret Moore, who has faced recent criticism over her office’s handling of sexual assault cases, is up against two new, and more progressive, opponents: Erin Martinson, a former victims’ advocate at the Texas Legal Services Center, and Jose Garza, a labor and immigrant rights attorney with the Workers Defense Project.

For Garza, many voters were unaware of his work when he entered the race last summer, but over the past year, he has gained momentum with the help of Real Justice, a national political action committee that targets prosecutors who are tough on nonviolent crimes that can discriminate against communities of color. Garza is seeking to make major progressive changes in Austin; most notably, he has promised not to prosecute the possession of under one gram of any drug in an effort to take substance use issues out of the court system. Garza has also committed to never seek the death penalty and is pushing to drop the requirement that people first plead guilty as a condition of entry to diversion programs. Along with these big changes, Garza has promised to oppose transferring children to the adult system and to advocate for home-based alternatives to detention for kids, while Moore has no platform regarding juvenile justice.

In the first part of the DA election on March 3rd, Moore received 41% of the vote while José Garza pulled ahead with 44%. Erin Martinson finished with 14% and later announced that she would be supporting Garza for the rest of the election. The race will continue into a May 26 runoff and the winner faces Republican Martin Harry in the November election.

As this race in Texas continues, Los Angeles, CA is also amidst an election for district attorney. As in many other places, LA has a disproportionate number of Black and Latino people in their prisons, jails, on death row, and as victims of police shootings. These disparities are driving this current election for DA, as many voters are looking for a candidate who can fix a system that has criminalized poverty and race. The progressive leader in the Los Angeles race is George Gascón. As San Francisco’s district attorney for nine years, Gascón has implemented practices that have become a central part of the practice of current prosecutors such as promoting alternatives to jail, limiting cash bail, and deciding charges based on race-blind information. More recently, he has also worked on a state initiative that reduces many drug crimes to misdemeanors and has supported a proposal to adjust the legal standard for the use of deadly force by police. In January, Gascón’s campaign announced it’s policy committee, which included attorney Alisa Blair who has worked on many juvenile court cases to keep youth under juvenile court jurisdiction.

In this election, Gascón’s opponent is Jackie Lacey, a career prosecutor who was the first woman and the first African-American to be elected district attorney in Los Angeles in 2012. Now, Lacey is facing criticism for many of her decisions and judgments over the past 8 years, such as seeking the death penalty and failing to charge police officers who have killed civilians. As of now, Lacey does not have any published stance on juvenile justice issues.

After the vote on March 3rd, Lacey just barely made it above the 50% threshold needed to avoid a runoff, with former San Francisco DA George Gascon is in second at 27%. Still, it is estimated that there are more than a half-million ballots left to count, so the outcome may remain unclear for some time. In a place where incarceration rates are high and income inequality is fueling an unfair criminal justice system, people are looking to this election for a leader.

As candidates on the local and national level continue to fight for their policies and beliefs, it is more important than ever to hold our representatives accountable. Bias continues to persist in the criminal justice system, and in every state, juveniles are still tried as adults. With this in mind, it is imperative that voters are aware of the ongoing elections and they are educated on those candidates who will fight for a fair criminal justice system.