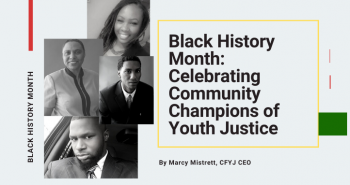 In recognition of Black History Month, CFYJ will feature a month-long series that celebrates advocates, elected officials and spokespeople that are leading the charge to reform how youth are treated in the criminal justice system.

When it comes to the crusade for children, especially youth facing adult prosecution, African American advocates and families are leading the charge, and setting a new table for justice transformation. As the most racially disparate contact point that children of color have with the justice system, it makes sense that the many wins that end the adultification of children are being championed by communities of color. Black History Month gives us the opportunity to highlight a handful of these efforts.

In South Carolina, Antiwan Tate, of My Brothers Keeper, has brought impacted youth to the table since the launch of the South Carolina Raise the Age Coalition.  My Brother’s Keeper is joined by Vivian Anderson of EveryBlackGirl, that creates opportunities for black girls to become leaders for justice. In South Carolina, young people from both of these organizations co-facilitated discussions at statewide meetings about alternatives to incarceration, shared their stories with legislators, and are now listening to their peers to identify better investments for the state of South Carolina to make outside of incarceration to help keep young people safe and moving toward their goals.  We know the next generation of leadership across the state is in excellent hands.

In Maryland, Ashley DeVaughn of Advocates for Children and Youth has stepped into leadership of the Maryland Youth Justice Coalition, fighting for a fairer youth justice system that includes ending the adultification of youth.  Maryland charges nearly 700 children under age 18 as if they were adults, with one of the most expansive transfer laws in the country. In response to a call for heavy policing in Baltimore’s Inner Harbor this past summer, Ashley was part of BMorelive19 along with Rashad Hawkins of BMore Awesome to help create a community collective that provided positive summer arts events for young people 14-21.

Meanwhile, as Connecticut celebrates ten years of raising the age, the CTJJA Justice Advisors are collecting critical data from their peers across the state to build a platform for effective system transformation.  Justice Advisors, Shannone Hawkins and Jordyn Wilson have been leading the charge, including interviewing their peers at the Manson Youth Institute, where children as young as 15 are facing adult charges, housed in an adult facility.

Not far down the coast in Philadelphia, Josh Glenn is busy co-directing YASP (Youth Art & Self Empowerment Project) and hiring justice-impacted young people to help repeal Act 33, the automatic transfer law in Pennsylvania.  Josh works tirelessly at YASP to hire young people who just spent time in the adult jail or are home from prison to engage them in their organizing and advocacy efforts. Read here, about their newest organizer, William Bentley who runs their Tuesday Youth Justice Hub.

The movement includes the activism and leadership of Veronica Williams of Waukegan, IL, a mom who has been a tireless advocate to change the laws that advance the school to prison pipeline, removing youth from the sex offender registry, and ending felony murder charges in Illinois.  As one of the biggest champions of Youth Justice Action Month, Veronica runs events all year to shine attention on the ways the justice system is perpetuating harm on black children and families, and was recognized on Capitol Hill during the 10 year anniversary of YJAM in 2018.

Finally, CFYJ spokespeople, Alton Pitre and Rayheem Ethridge, fight for progress. Alton, a recent graduate of Morehouse College in Atlanta, where advocates are fighting to raise the age, brings his skills as a journalist and advocate from California advancing the strongest laws in the country that prevent youth from treatment as adults. And Rayheem, may finally see progress in Virginia, that just passed JLWOP reform, and where direct file reform has been passed in both chambers of the legislature.

As these young people and advocates show us, “Nothing About Us Without Us”…… their efforts are working; 30 states have active legislation this session fighting against children in the adult justice system.