Celebrating Ten Years of 'Raising the Age' in Connecticut 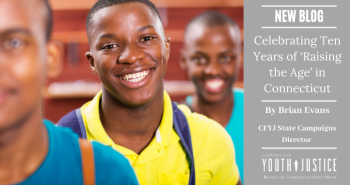 Ten years ago, Connecticut took a giant step forward and “Raised the Age” of criminal responsibility from 16 to 18 years of age. As one of only three states in the country that still considered all 16 and 17 year olds as adults, no matter how minor the charge, it was a radical notion for the state to make this shift. Passed in 2007 amid much concern and trepidation about its potential impact on juvenile crime and on the state’s budget, the law turned out to be a resounding success.

Over the last decade, as Connecticut’s “Raise the Age” law was implemented, juvenile crime rates fell faster than the national average, and the state saw reductions in school suspensions, arrests, incarceration, and transfer of children to the adult system. Crime among older teenagers and young adults also fell, a phenomenon Connecticut’s Governor at the time labeled it the “Raise the Age” effect, as keeping 16 and 17-year-olds in the juvenile system seems to have led to a reduced rate of offending as they got older.

By 2018, the number of 18–21-year-olds imprisoned in Connecticut has dropped 66 percent since 2010; while the number of arrests of children under 18 has dropped 40 percent in the same time frame, even after adding 16 and 17 year olds to those arrest numbers.

Fears of costs, to the tune of an estimated $100 million price tag utterly failed to materialize. In fiscal year 2011–2012, a year after the law was implemented, the state’s expenditures on juvenile justice were $2 million LESS than they had been ten years earlier. Further, the state was able to reinvest $39 million into community alternatives — which are shown to have better outcomes at a fraction of the cost.

Shrinking arrest numbers and reduced recidivism led Connecticut to embrace further reforms, including the closing of Connecticut’s youth prison (known as the Connecticut Juvenile Training School), reducing school based referrals to court, and shrinking the number of youth eligible for transfer to adult court. While raising the age has led to fewer youth being incarcerated in the adult and youth systems, not all children have benefit equally from the reforms. The 50–55 boys that are still held in the Manson Youth Institute (a maximum security adult Department Of Corrections facility that holds 15–21 year olds) are nearly exclusively children of color, who are exposed to inhumane and cruel conditions in the facility according to a report by the Connecticut Office of Child Advocates; conditions that are poor enough to have led to a U.S. Department of Justice Investigation. The good news here is that a decade ago, there were more than 200 youth under age 18 in Manson, and the state has clearly figured out a way to keep white youth out of Manson, so with some prioritizing and goal setting, Connecticut can fix this too.

Despite these shortcomings, Connecticut’s progress inspired a movement. Using data and storytelling, advocates and system stakeholders took their wins on the road. By 2018, New York and North Carolina passed “Raise the Age” laws, meaning no state in the country set 16 as the age of majority. But the movement didn’t stop there — eight other states[1]also changed their law to bring 17 year olds back to under juvenile court jurisdiction. Vermont took it a step farther and will soon include 18 and 19-year-olds in their juvenile justice system.

With the passage of “Raise the Age” laws in 11 states, there are just three that remain where 17-year-olds are automatically charged as adults: Georgia, Texas, and Wisconsin.

What are these states waiting for?

All states have considered “Raise the Age” proposals in recent years (a bill passed in the Texas House of Representatives in 2017), and a bill in Georgia is now getting serious attention. Texas and Wisconsin both have highly problematic youth prisons, but as Connecticut’s experience demonstrates, closing such outdated and harmful facilities can follow quickly on the heels of raising the age, thanks to the resultant decline in arrests and offending. In a similar vein, fears about costs proved unfounded in Connecticut (as well as in other “Raise the Age” states like Illinois and Massachusetts); there is no reason to believe that Georgia, Texas, and Wisconsin will not have similar experiences when they “Raise the Age”.

Simply put, the positive impact of “Raise the Age” offsets costs and sets the table for further reforms. It works in every meaningful way. Connecticut’s decade of experience proves it.