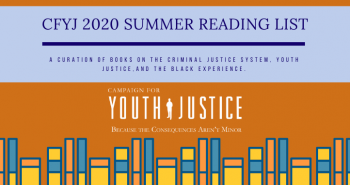 There has never been a better time to read.  Between the great pause of COVID-19 and the powerful moment we are experiencing in the fight for racial justice, the Summer of 2020 presents an opportunity to better ourselves and expand our thinking through literature. The team at the Campaign for Youth Justice has compiled a list of 13 books that will expand your knowledge of the Criminal Justice System, Juvenile Justice, and the Black experience in America. Happy reading!

Reed’s debut novel shines a light on the good, bad, and ugly of Juvenile Justice in an entertaining way. The Car Thief follows a young teen through the child welfare and criminal justice systems.

“Reed’s ability to capture the absurdities of our Criminal Justice System through the eyes of a teen will make you laugh, cry, and advocate for reforms.” -Marcy Mistrett, CFYJ CEO

This is essential literature for those who believe in the abolition of prisons and for those who are yet to be convinced.  Davis analyzes the history of our Justice System, arguing brilliantly that it is time for it to be reimagined.

#3- "Felon" by Reginald Dwayne Betts (A former CFYJ Board Member!)

For all of our poetry buffs, Felon by Reginald Dwayne Betts is the summer reading for you. Through his poetry, Betts explores the struggles of incarceration that go far beyond the day an individual is released. Betts, a long time partner of CFYJ’s has been writing for more than a decade, since he was sent to adult prison as a child, and is now a highly renowned author and attorney who continues to fight for those he served with who are still incarcerated. . Felon won the 2019 NAACP Image Award for Outstanding Literary Work in Poetry, and was a finalist for the 2019 Los Angeles Times Book Prize in Poetry.

“This book of poetry, by Reginald Dwayne Betts, provides the reader with an understanding of the powerful, existential impact of incarceration in ways no policy analysis ever could.” -Brian Evans, CYFJ State Campaigns Director

#4- "Stamped from the Beginning: The Definitive History of Racist Ideas in America" by Ibram X. Kendi

“Contrary to popular conceptions, racist ideas did not arise from ignorance or hatred. Instead, they were devised and honed by some of the most brilliant minds of each era. These intellectuals used their brilliance to justify and rationalize deeply entrenched discriminatory policies and the nation’s racial disparities in everything from wealth to health. And while racist ideas are easily produced and easily consumed, they can also be discredited. In shedding much-needed light on the murky history of racist ideas, Stamped from the Beginning offers us the tools we need to expose them—and in the process, gives us reason to hope.” - Ibramxkendi.com

“Ibram X Kendi's first book explains in 500 pages why its important to say, "Black Lives Matter"; the book goes over every intentional and deliberate action that the US has taken to enshrine racism in our policies, culture, and practice.” - Marcy Mistrett, CFYJ CEO

#5- "When They Call You a Terrorist: A Black Lives Matter Memoir" by Patrisse Khan-Cullors and Asha Bandele

Patrisee Khan-Cullors, a co-founder of Black Lives Matter, discusses the history and importance of the movement in this novel with Asha Bandele. She speaks to the vulnerability of being black in the United States, of the constant threat of a Justice System set up to uphold white supremacy, and of the struggles of leading a movement that has been frequently criminalized by the media despite simply trying to affirm the right to live of a population that has been marginalized and harmed since the founding of this country.

“This read is more timely now than ever, given our current political climate. It provides a great background on the black-freedom-struggle narrative, American racism, and why Black Lives truly do Matter,” - Aprill O. Turner, CFYJ Vice President of Communications.

#6- "The Color of the Law: A Forgotten History of How Our Government Segregated America" by Richard Rothstein

What it’s about: In this novel, Richard Rothstein analyzes the persistent segregation observed in the United States, tying it all back to intentional legislation at the local, state, and federal levels. While real estate agents and private lenders are frequently blamed for the segregation in our communities, Rothstein proves that their discriminatory actions would not be possible without the law that enables them.

“Remember when Henry Louis Gates was arrested at Harvard for entering his own home? Well this book unpacks the local, state and federal laws that were created to reinforce segregation and white supremacy. While the laws may not exist on paper, this recent event makes us understand why learning our history is so important in becoming an anti-racist society.” -Marcy Mistrett, CFYJ CEO

#7- "We Want To Do More Than Survive: Abolitionist Teaching and the Pursuit of Educational Freedom" by Bettina Love

This novel explores the racist roots of the American education system which disproportionately funnels Black and Brown children in the Criminal Justice System. Bettina Love encourages her fellow educators to engage in abolitionist teaching - fighting to recreate rather than reform the educational system and achieve educational freedom.

“This is a great read for those interested in Youth Justice and an essential read for educators or anyone that works with children. Bettina Love unapologetically advocates for the children of color that are so often robbed of their childhood and pushed into an unforgiving justice system because of an education system set up to benefit the white and wealthy.” -Kathryn Allen, CFYJ Communications Fellow

#8- "Our Enemies in Blue: Police and Power in America" by Kristian Williams

In this illuminating piece, Williams analyzes policing in the United States and the history of harm it has incurred on communities of color. In his research, Williams demonstrates that policing was never built to protect and serve all citizens.

“Williams shows that police brutality isn't an anomaly, but is built into the very meaning of law enforcement in the United States.” -Kristian Williams via AK Press

#9- "We Keep Us Safe: Building Secure, Just, and Inclusive Communities" by Zachary Norris

In his book, Zach Norris helps us reset our notion of what it means to be "Safe."  He calls on us to move away from a "safety system" that advances "structural racism and disinvestment, and a punitive system that dehumanizes and isolates people instead of fostering accountability".  Rather, Norris says we should be building a culture of "care" that shifts our economic practices away from centralized power in a few, to a broader more humanistic economic system that is grounded in dignity and respect and benefits the many.

“This is a great read that ties economic justice to the necessity of ending mass incarceration. As always, Norris' book is grounded in the lived experience of those individuals and families who experience the most violence and least economic security.” -Marcy Mistrett, CFYJ CEO

#10- "White Fragility: Why It's So Hard for White People to Talk About Racism" By Robin DiAngelo

In this book, Robin DiAngelo (who coined the term ‘white fragility’) analyzes white reactions to discussions of race and racism. DiAngelo, who is white, aims this narrative particularly at white liberals who struggle to acknowledge their dangerous and harmful role in the upholding of white supremacy.

“This is an essential read for all white folks, especially those who struggle to see their role in racist structures and find themselves squirming at the mention of race or white privilege.  This book will enlighten you and challenge you in the best way!” -Kathryn Allen, CFYJ Communications Fellow

#11- "Until we Reckon: Violence, Mass Incarceration, and a Road to Repair" by Danielle Sered

In this novel, Danielle Sered, Executive Director of Common Justice, dives into the often circumvented topic of violent crime.  Sered explores the benefits and possibilities of taking a restorative, victim-centered approach to violent crime that heals rather than punishes.

“Danielle Sered acknowledges that our current legal system is not grounded at all in restoration and healing; in lacking this it not only fails to bring about justice, but also healing to victims of crime.  Sered found a different way than the legal system to restore safety and advance healing between survivors of violence and those who caused the harm.” Marcy Mistrett, CFYJ CEO

#12- "Free Cyntoia: My Search for Redemption in the American Prison System" by Cyntoia Brown-Long with Bethany Mauger

Cyntoia Brown was sentenced to a minimum of 51 years in prison for an act of self-defense committed at the age of 16. After serving 15 years of that sentence, Brown was granted full clemency in January of 2019.  In this memoir, Cyntoia gets to tell her story.

“This is an excellent read told in Cyntoia’s own words. We were already familiar with Cyntoia’s story since over the past couple of years, people across the country rallied in support of Cyntoia and advocated for her to receive clemency, but it is extremely gripping to hear the realities behind the media coverage.  Through telling her story she reminds us about the countless other young girls that are also trafficking survivors and have had to serve time, and that we must continue to advocate for them,” - Aprill O. Turner, CFYJ Vice President of Communications.

#13- "Hood Feminism: Notes from the Women that a Movement Forgot" by Mikki Kendall

For those who struggle to see the issues with the modern feminist movement, Mikki Kendall will tell you exactly where the problems lie. In this novel, Kendall critiques the feminist movement which too often focuses on increasing the privilege of white women and leaves behind women with intersecting, marginalized identities.

“As a white woman, this book will force you to look deeper at how feminism ignores issues of race, sexuality, and class to prioritize the issues of white women. This has led to a movement that often allows women to oppress one another and ultimately fails to help the most marginalized among us.” -Kathryn Allen, CFYJ Communications Fellow