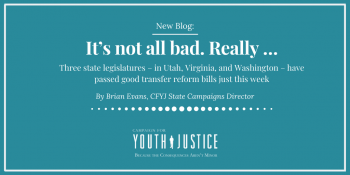 For example, good legislation to reduce the number of children transferred to the adult court, or at least mitigate the harm caused by this practice, has started to move in state legislatures. Three state legislatures – in Utah, Virginia, and Washington – have passed good transfer reform bills just this week.

As with other issues, the Virginia General Assembly has been busy in this area. First, Virginia passed a bill giving children sentenced as adults eligibility for parole after 20 years (HB 35, signed into law). It has now also passed a bill to eliminate mandatory minimum sentences for children charged as adults (HB 744) and, perhaps most significantly, legislation (HB 477/SB 546) that would raise to 16 the age at which a prosecutor could directly file adult charges.

While Virginia was expected to pass reform legislation with its new Democrat-controlled legislature, Republican dominated states – KY (SB 87) and UT (HB 384) – are also moving transfer reform bills. Kentucky’s bill has passed the state Senate, while Utah’s bill has passed and will be headed to the Governor.

The Kentucky bill eliminates the automatic transfer of children to the adult court, requiring instead that judges make that determination. Utah’s proposal also eliminates automatic transfer (with exceptions for murder), and it includes a section designed to bring the state closer into compliance with new federal rules requiring that children charged as adults be kept out of adult jails pre-trial.

This requirement, part of the re-authorization of the Juvenile Justice and Delinquency Prevention Act (JJDPA) that President Trump signed into law at the end of 2018, has compelled several other states to push similar jail removal legislation. Oklahoma’s bill (HB 3214) has passed the state House, and Washington’s bill (HB 2277), which also includes a ban on the solitary confinement of children, has passed both chambers and is headed to the Governor.

Jail removal bills have also been filed in Florida (HB 421/SB 618), Indiana (SB 336), and Iowa (SF 2279), and a comprehensive bill that includes both jail removal and transfer reform (SB 1018) has been filed in South Carolina by Senator Gerald Malloy, the same state Senator who recently championed their successful Raise the Age law.

As a side-effect of New York’s Raise the Age law, children charged as adults (known as Adolescent Offenders) have been housed in facilities managed by adult corrections staff who have relied heavily on the use of solitary confinement. In the Governor’s proposed budget (A9505/S7505) is language to keep those children in facilities managed by the Office of Children and Family Services (OCFS).

In terms of Raise the Age, Georgia (one of the three remaining states that has not passed a law to raise the age of adult court jurisdiction to at least 18) has seen its Raise the Age bill (HB 440) pass unanimously out of its House committee, while Missouri has launched a Blue Ribbon Panel on Juvenile Justice to coordinate implementation of their Raise the Age law, which goes into effect January 1, 2021.

And finally, several states are looking to “Raise the Floor” – that is, set or raise the age at which younger children can be prosecuted and/or detained in the juvenile system. Such legislation is better for younger children, and helps make room for the juvenile justice system to support the older children who are increasingly not being tried as adults. Bills to Raise the Floor for detention are moving in Mississippi (HB 1173) and Oklahoma (HB 1282) – both bills have passed their respective state House. A Utah bill to Raise the Floor for prosecution to 12 (HB 262) has passed both the House and a Senate, and is on its way to the Governor.

All in all, given the extremely contentious political climate, it is impressive to see states across the political spectrum continuing to pursue measures that will keep children out of the adult system. The consensus that children should be treated as children appears to be holding.