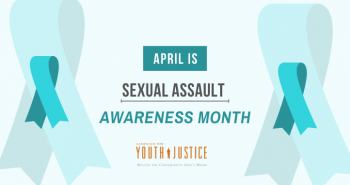 April is Sexual Assault Awareness Month (SAAM), a time to support those who have been victims of sexual assault and to promote awareness on the sexual victimization that is still prevalent in our society. Sexual violence exists in all communities and affects individuals from all walks of life, no matter their race, age, or gender. About 1 in 6 women and 1 in 33 men in the U.S. have been the victim of sexual assault during their lifetime. Though the exact prevalence of sexual assault against children is not known due to lack of reporting, it is estimated that 1 in 3 girls and 1 in 5 boys are sexually abused before the age of 18. These traumatic experiences live on in the minds of victims and can have a multitude of psychological, emotional, and physical effects.

Despite legislation and policy changes within the U.S., sexual violence in prisons continues to persist in correctional facilities throughout the country. Most prison staff are not trained or educated on the process of reporting instances of sexual assault, leading to underreporting and inadequate treatment for the resulting effects of the assault. Research has shown that youth are at the greatest risk of sexual victimization in adult facilities, as juveniles are 5 times more likely to be sexually assaulted when placed in the adult system rather than in juvenile facilities. In response to these issues, in 2003, The Prison Rape Elimination Act (PREA) was created to put a stop to sexual violence in prisons. In 2012, the regulations for the implementation of the law were finalized; meaning states have had 8 years and a $35 million in federal grants to implement PREA.

An essential part of this legislation is the Youthful Inmate Standard (Section 115.14) which requires youth (individuals under 18) to be separated from the adult inmate population. Under the Justice for All Reauthorization Act of 2016 (JFA), states are facing a six-year deadline to comply under the penalty of losing a percentage of their funding. This addition to the legislation was created in the hopes that it would increase compliance with PREA, as well as increase protection for youth in adult facilities. While these acts have created a conversation around sexual assault within prisons, as of 2018, only 16 states have fully complied with PREA standards; this is up from 2 states only three years ago. It is important that we push every state which has not yet achieved full compliance with PREA to do so as placing children in adult facilities puts them at increased risk for not only sexual assault but trauma and suicide as well.

Throughout this month, we urge you to not only support those who have been affected by sexual victimization but to raise awareness for youth in secure custody in the juvenile and adult systems who do not have the resources to advocate against the sexual violence they are facing. At CFYJ, we hope states will continue to create and enforce policies aimed at ending sexual violence for youth who are tried and incarcerated in the adult criminal justice system. We also support reforms at the federal level that protect young people from abuse in institutions by exempting them from the strict filing requirements of the Prison Litigation Reform Act (PLRA).  The PLRA currently creates obstacles for young people seeking relief in federal court who face abuse in juvenile and adult correctional facilities, by requiring incarcerated youth to file grievances before bringing a lawsuit, sometimes with the very people who have abused them. The Justice for Juveniles Act (H.R. 5053), introduced by Rep. Mary Gay Scanlon (D-PA), Kelly Armstrong (R-ND), Hakeem Jeffries (D-NY), John Katko (R-NY), and Guy Reschenthaler (R-PA) would exempt youth from these strict filing requirements.  For more information on how youth are affected by this issue, please visit the SAAM page on the National Sexual Violence Resource Center (NSVRC) website.