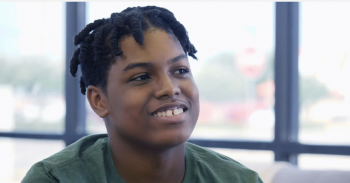 The two-month rapid decline in admissions seen in March and April 2020 is reflected in an Annie E. Casey Foundation survey of jurisdictions around the country aimed at assessing the effects of the coronavirus pandemic on juvenile justice systems. Working with the Pretrial Justice Institute and Empact Solutions, the Foundation first collected data just weeks after the coronavirus arrived in the United States.

But while admissions into detention have dramatically slowed, systems also have slowed the rate at which they release young people from facilities — leaving many still living in confinement without access to opportunities or connections, and potentially vulnerable to the virus. After a burst of releases in March, the rate of release of young people from secure detention in April dropped below its pre-COVID-19 level, the latest data collected by the survey showed.

The juvenile detention population fell more steeply for African American youth than for white youth, based on a subset of jurisdictions that responded with information disaggregated by race and ethnicity. While the population reductions for African American youth were only slightly larger, they are significant simply because youth justice practitioners have struggled for decades to make progress in reducing disparities for young people of color, who are consistently overrepresented in the nation’s courtrooms and detention centers, youth prisons and other residential institutions.

The jurisdictions responding to the latest survey are home to 35% of the U.S. youth population, ages 10 to 17. Most of the responding communities are involved in the Juvenile Detention Alternatives Initiative® (JDAI), a network of juvenile justice practitioners and other system stakeholders across the country working to build a better and more equitable youth justice system.

Begun almost three decades ago as a pilot project to reduce reliance on detention, JDAI is active in more than 300 cities and counties in 40 states and the District of Columbia.

The Role of Detention Centers in Juvenile Justice Detention centers are different than youth prisons or other residential placements where young people could be sentenced after being adjudicated delinquent. Rather, detention is a crucial early phase in the juvenile justice process. It’s the point at which the courts decide whether to confine a young person pending their court hearing or while awaiting placement into a correctional or treatment facility rather than allowing the young person to remain at home.

Every year, an estimated 218,000 young people spend time in detention facilities nationwide, despite the negative effects of detention on young people and persistent racial disparities in who is detained.

Key Findings From Juvenile Justice Survey The survey findings include the following:

The decrease in population was driven primarily by a steep decline in the rate of admissions. In February, these jurisdictions reported an average of 207 admissions per day. But in April, the average was less than 100 admissions per day ― 52% below the pre-pandemic rate.

Most jurisdictions were able to increase the rate at which they were releasing young people from secure detention in March, but in April the rate of releases slowed to less than their pre-COVID-19 rate. In February, an average of about 56% of young people who were in detention during the month were released by the end of the month. In March, even while admissions were plummeting, that release rate increased to 61%. But in April, it fell to 53%.

Population declines were slightly steeper for youth of color. Among jurisdictions that provided information disaggregated by race and ethnicity, about one-fifth of detained young people are white, while more than half are African American and nearly one-fourth are Latino. As detention populations have gradually fallen year by year, white youth have often seen higher rates of decrease than youth of color. But over the first two months of the pandemic crisis, the largest percentage decreases in detention have been among youth of color. While the number of white youths in detention fell by 26% from March 1 to May 1, the number of African American youths and Latino youths fell by 30% and 29% respectively. This has been a result both of larger decreases in the rate of admissions and smaller decreases in the release rate among youth of color than among white youth.

Most jurisdictions reported no cases of COVID-19 as of May At the time of the survey in May, 65% of the jurisdictions responding said that they had access to information about COVID-19 cases among youth and/or staff in detention facilities. Among those with access to that information, the vast majority (85%) reported no confirmed or suspected COVID-19 cases among their staff or youth.

Among the 15% that did, they identified a total of 65 youth cases as of May and another 19 youth recovered. The survey was not designed to calculate COVID-19 prevalence rates for individual facilities, but among jurisdictions reporting any youth cases, the number of cases they reported was about 8% of their combined populations as of May 1. They reported a similar number of staff cases, with 60 current cases confirmed or suspected, and another 20 recovered.

About the Survey This survey, conducted from May 6 to 15 and covering the period from January 1 to May 1, is unique because it reports on data from hundreds of jurisdictions in close to real-time. The information came from large urban counties and small rural courts, among a wide range of jurisdictions that collectively held more than 4,500 youths in secure detention on March 1, 2020. For perspective, approximately 15,660 young people are held in detention nationally on any given night, according to the most recent federal data in 2017.

There are no direct points of comparison that place this two-month reduction in context. Available data on detention utilization from national surveys indicate that significant changes in detention typically accrue over several years.

This is a non-random sample, so it is not an accurate source from which to derive national estimates nor determine statistically how representative this group of jurisdictions is of the nation as a whole. A greater number of jurisdictions replied to the survey in May than during the initial data collection in April, so their results cannot be directly compared.