Girls in Justice: A Thought-Provoking Glimpse of Girls in the System

“I have interviewed and photographed children in confinement for the better part of a decade. As I sit on the floor of a cell and listen, each story, each child tells is enlightening, but the stories of the girls stir a special compassion.”

This is how Richard Ross, Professor of art at the University of California - Santa Barbara prefaces his newest book Girls in Justice.

With powerful images and first-hand accounts from over 250 detention facilities across the nation, Girls in Justice captures life behind bars and the physical, emotional and mental effects on young women in the criminal justice system. The evocative imagery alludes to the causes of trauma – sexual abuse, drug usage and forced prostitution to name a few – that many young girls in prisons face long before coming into contact with the system, and shocks the reader into questioning the criminal justice system today and its failure to address the underlying causes of delinquent behavior in girls.

The book highlights a harsh reality: girls in custody report nearly two times the rate of past physical abuse, two times the rate of past suicide attempts, and four times the rate of prior sex abuse as boys. In the process, it forces the reader to ask him or herself “what message is the criminal justice system sending to young girls today? Is it helping or further exacerbating the problem?” Ross seems to think the latter. “These girls in detention and commitment facilities are further abused by an organized system that can’t recognize or respond to their history and their needs,” Ross writes.

Girls in Justice is out this month. To order and for more information, visit here. 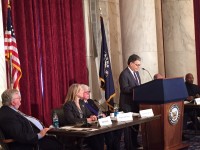 The panelists and congressional speakers emphasized the need for bipartisan cooperation in supporting legislation like the Second Chance Act. Goals brought up in the discussion included data-tested methods to help former inmates integrate successfully into society and recidivism reduction. The rationales for these proposed changes were grounded in arguments that criminal justice reforms are economically beneficial, morally just and safer for the community at large.

The discussion also touched upon mental health within the criminal justice system, and the potential risks of not addressing mental health issues in prisons.

NEW REPORT: Closer to Home: An Analysis of the State and Local Impact of the Texas Juvenile Justice Reforms

Today, the Council of State Governments (CSG) Justice Center released a first-of-its-kind study regarding the results of Texas’ bipartisan effort to improve the state’s juvenile justice system.  The report, Closer to Home: An Analysis of the State and Local Impact of the Texas Juvenile Justice Reforms, provides empirical support for the fact that secure correctional facilities are ‘no place for kids’.The CSG study, which draws on an unprecedented dataset in Texas – 1.3 million individual case records spanning eight years, assembled from three state agencies – demonstrates highly effective investments by Texas policy-makers in community-based supervision and programming.CFYJ commends CSG for this comprehensive report."CFYJ applauds Texas policy makers, families, and advocates for their smart and effective response to youth crime. It is clear from the CSG report released today that states can reduce the inappropriate incarceration of youth while building safer communities,” said Marcy Mistrett, CFYJ’s CEO. “The finding that youth released from state-secure facilities are three times more likely to commit a felony than similar youth under community supervision, underscores the need to invest in developmentally appropriate, community-based responses for youth.  Texas could further their great impact by raising the age of juvenile court jurisdiction to 18 years, so that thousands more youth could benefit from what we know works."Some of the reports findings include:

Please visit this link to download, Closer to Home: An Analysis of the State and Local Impact of the Texas Juvenile Justice. 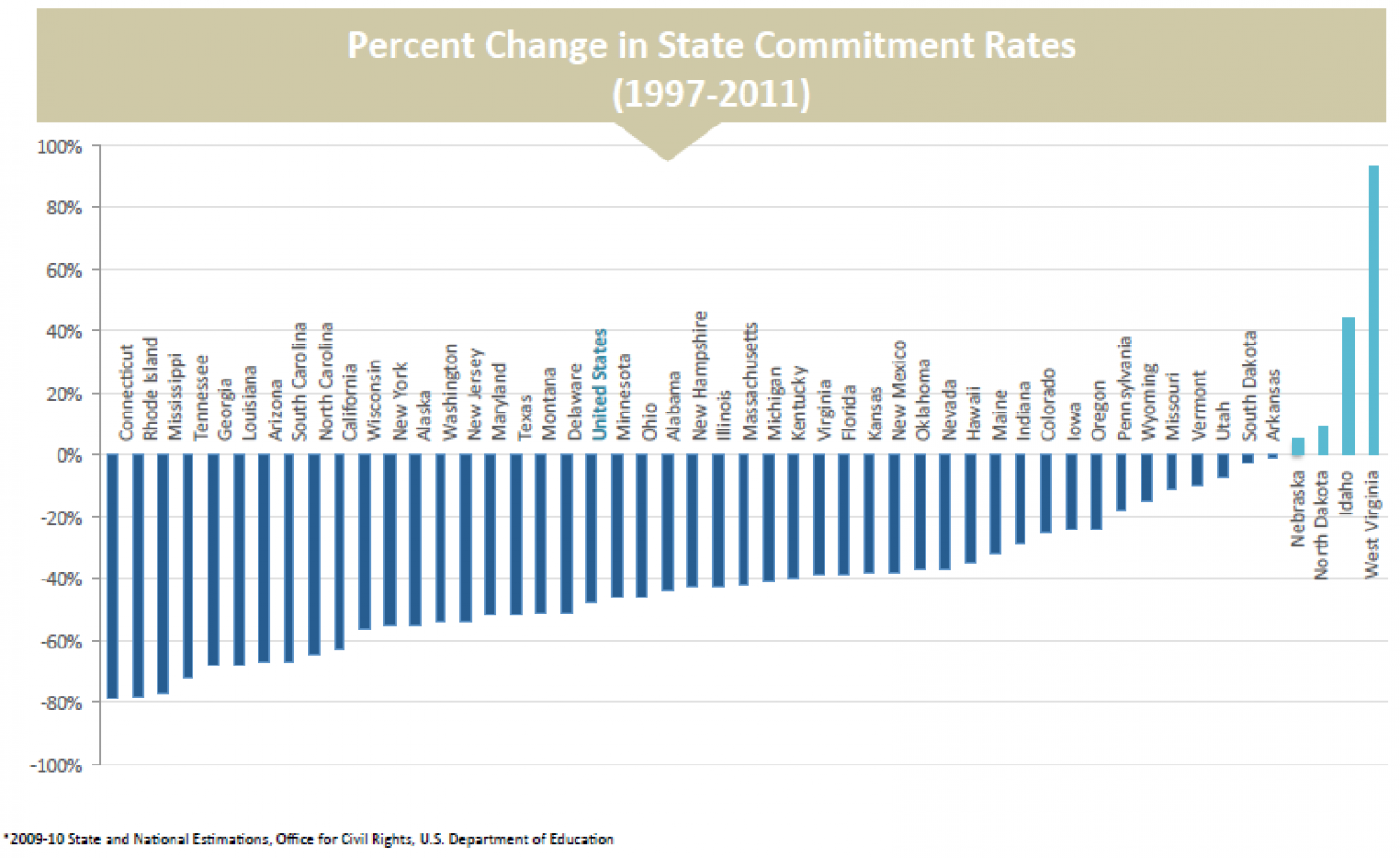 States seeking to develop or improve policies and practices that improve outcomes for justice-involved youth with behavioral health disorders are encouraged to apply to the 2015-16 Improving Diversion Policies and Programs for Justice-Involved Youth with Behavioral Health Disorders: An Integrated Policy Academy Action Network Initiative. Up to four states will be selected to participate in this opportunity, which has proven very successful for the 12 previous Policy Academy participants.

Created by the Substance Abuse and Mental Health Services Administration (SAMHSA) and the John D. and Catherine T. MacArthur Foundation, this initiative seeks to help states learn about effective interventions and the latest research, and work on similar innovations in policy and practice in a cross-site effort.

Throughout the initiative, special attention will be devoted to the following:

This initiative is made possible by the Substance Abuse and Mental Health Services Administration (SAMHSA) and the John D. and Catherine T. MacArthur Foundation, and will be coordinated by the National Center for Mental Health and Juvenile Justice at Policy Research Associates, Inc. and the Technical Assistance Collaborative, Inc. For more information or an application, please contact Karli Keator at This email address is being protected from spambots. You need JavaScript enabled to view it. or click here.

OP-ED: UN Calls Out US on Police Violence, Criminalization of Youth of Color 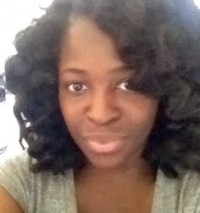 The death of Michael Brown, an unarmed black teen fatally shot by police in Ferguson, Mo., has brought national attention to the serious and sometimes deadly interactions that youth of color often have with the police.

However, racial discrimination against youth isn’t limited to encounters with the police. These policing practices often result in youth being funneled into the criminal justice system. In the United States approximately 200,000 youth under 18 are tried as adults each year, and on any given day more than 6,000 youth are detained in adult jails and prisons. Due to the racial disparities at every stage in the process — from decisions about whom to stop through whom to prosecute as adults — the majority of the youth in the adult system are minorities.

These young people spend their formative years in adult jails and prisons that frequently place them at risk for sexual and physical violence. Locking youth away in adult facilities that do not address their developmental needs or capacity for change destroys their future.

A United Nations human rights body recently criticized the U.S. for the severity of police use of force against youth of color and its treatment of youth in the criminal justice system. The U.N. Committee Against Torture expressed concern in “Concluding Observations” over the “conditions of detention for juveniles, including their placement in adult jails and prisons” and recommended that the U.S. “resort more to alternatives to incarceration” for juveniles. The committee also emphasized the need to end practices that are particularly harmful to youth. It stated that the U.S. should abolish solitary confinement for juveniles, “ensure that juvenile detainees and prisoners under 18 are held separately from adults” and prohibit the use of stun guns on children.

The committee also expressed concern about “numerous reports of police brutality and excessive use of force by law enforcement officials, in particular against persons belonging to certain racial and ethnic groups.” It articulated “deep concern at the frequent and recurrent police shootings or fatal pursuits of unarmed black individuals.” It noted in particular reports of racial profiling and excessive use of force by the Chicago Police against African-American and Latino young people.

Other U.N. bodies have criticized the U.S. for racial profiling, discrimination in the justice system and laws and policies that allow or require youth under the age of 18 to be treated as adults in the criminal system. In August, the U.N. Committee on the Elimination of All Forms of Racial Discrimination (CERD) issued “Concluding Observations” expressing concern about racial disparities at all levels of the criminal and juvenile justice systems. CERD criticized the “disproportionate rate at which youth from racial and ethnic minorities are ... referred to the criminal justice system, prosecuted as adults, and incarcerated in adult prisons.”

It recommended that the U.S. address the racial disparities and “ensure that juveniles are not transferred to adult courts and are separated from adults during pretrial detention and after sentencing.” CERD also expressed concern about the “practice of profiling racial and ethnic minorities by law enforcement officials.” It emphasized concern over the high levels of brutality and excessive force used by law enforcement officers toward mostly “members of racial and ethnic minorities, including unarmed individuals.”

The Committee Against Torture and CERD criticism of the U.S. reflect important concerns about how racism affects the policing of communities and the treatment of youth of color within the criminal justice system. They also reflect the consensus of the international community that children in conflict with the law have the right to special protection because of their youth and their capacity for change. Subjecting youth to adult criminal punishments rather than providing age-appropriate rehabilitative programs during a crucial time in their development will have a lifelong detrimental impact.

The comments from these two U.N. committees recognize that we must do more to address racial discrimination and to protect youth of color. It is time the U.S. is held accountable for the actions of law enforcement officials and pushed to develop alternatives to the criminalization of youth. Hopefully, the recent international scrutiny can support advocates currently taking to the streets in solidarity to show that the lives and future of minority youth do matter.

Tawakalitu Amusa is a third-year law student in the International Women’s Human Rights Clinic at the City University of New York Law School. IWHR submitted a report to the U.N. Committee Against Torture with the Campaign For Youth Justice and other groups.

A recent report released by the Department of Justice, Bureau of Justice Statistics (BJS), reveals that the U.S. prison population has increased for the first time since 2009. The report, “Prisoners in 2013” notes that state and federal prisons held approximately 1,574,700 prisoners on December 31, 2013, an increase of about 4,300 prisoners from year-end 2012.

This reversal in a three year trend of declining prison population rates is due to an increase in 2013 of 6,300 inmates in the state prison population. This is a significant change from a similar BJS report published about two years ago, “Prisoners in 2011,” which displayed a decline of 21,614 state prisoners at year-end 2011.

As Youth Justice Awareness Month (YJAM) quickly approaches, the Campaign for Youth Justice wants to assist you in putting on your event - starting now! Along with the toolkits and templates available on our YJAM page, the CFYJ team has developed a set of tutorials on what it takes to host a successful YJAM event. Tips ranging from hosting any size event, FUNdraising, and even how to plan a 5K Race!

Are 17 year olds really old enough to be sent to adult prisons? In NH, since 1995, the answer has been YES. Over the past decade, as states across the US have recognized that 17 year olds are still children, NH was unwilling to change. Since 2000, Representative David Bickford (R ) attempted to “Raise the Age” without much support, that is until this year. Following on the heels of a successful restoration of the CHINS (Children in Need of Service) statute and funding, the same group of advocates set their sights on modernizing the juvenile justice system in NH, including Raising the Age.

Youth Justice Awareness Month 2014 is just around the corner!

We are so excited for this year’s Youth Justice Awareness Month (YJAM)!

Every October, youth, families, and advocates from all over the nation come together to host YJAM events to expose the consequences of children being prosecuted in the adult criminal justice system and incarcerated in adult jails and prisons. Together, we build collective action to launch and support local campaigns that work towards fair, humane, and effective reform.

Thousands of children have been funneled into Michigan’s adult prison system due to a series of harsh “tough on crime” laws on perceived youth violence, according to a new report by the Michigan Council on Crime and Delinquency (MCCD).